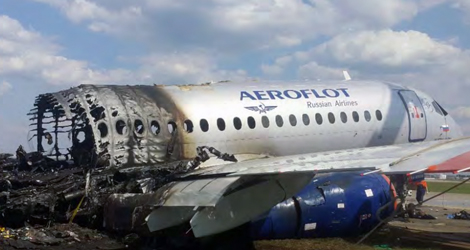 Update of Aeroflot superjet 100 flight SU1492 : a preliminary report has been issued today , June 16th 2019 by the Interstate Aviation Committee.

According to the preliminary report, the following facts have been proven:

The crew stopped the climb at about FL100 and declared initially loss of radio communication.

Later the crew declared emergency via transponder codes and returned to Sheremetyevo for an emergency landing.

According to radar tracks , the first approach was discontinued, the airplane made a 360° and approached Sheremetyevo runway for landing on Runway 24C

Weather at time of landing was not a factor for the landing, although not confirmed info says that a lightning strike might be involved in the accident :

According to CCTV cameras, the airplane bounced on the runway during landing and when it hit the runway again, caught fire.

During the deceleration, Aeroflot Superjet 100 flight SU1492 burst into flames , it made a 180° and stopped his landing roll out of the runway , on an intersection.

The airplane veered to the left off the runway and came to a stop on the grass adjacent to the runway, after making a 180°.

While the aircraft burned down, an evacuation started from the L1 and R1 doors via emergency slides.

Although the post accident rescue is still ongoing , 41 people are confirmed dead, including 2 children : it is not known at the moment how many passengers vs crew died in the accident.