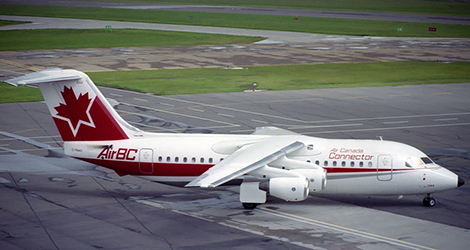 The British Aerospace BAe 146-200 aircraft, operated by Air BC as flight ABL597, was on a scheduled instrument flight rules (IFR) flight from Vancouver, British Columbia, to Terrace, British Columbia.

On board were two pilots, two cabin attendants, and 12 passengers.

Prior to the approach into Terrace, the pilots briefed for the localizer/non-directional beacon (LOC/NDB C) approach to Terrace, circling for landing on runway 33 or runway 15.

They flew the approach and broke out of cloud about 500 feet above ground level (AGL) to the northeast of the airport.

They then decided to fly the left-hand circling approach for runway 15 as they did not have the required visual reference to land on runway 33.

Due to the poor weather conditions, the crew had to manoeuvre the aircraft around low cloud during short final, but they followed the visual signal provided by the precision approach path indicator (PAPI) lights and established the aircraft on slope before landing.

Air BC flight ABL597 touched down on runway 15 about 1,650 feet from the threshold, as measured by airport personnel; it continued down the runway and went off the end at about 25 knots.

The aircraft rolled into the overrun area, and came to rest approximately 315 feet from the end of the paved surface, with its nose 39 feet to the right of the extended centre line.

The heading of the aircraft at rest was 154 degrees magnetic, 7 degrees right of runway orientation.

There was no damage to the aircraft and none of the passengers or crew was injured.

The passengers and crew deplaned the aircraft through the forward airstair door and were driven to the airport terminal by bus within about half an hour of the occurrence.

The crew flew a landing pattern in a narrow valley under marginal weather conditions that dictated an unstabilized approach to the slippery and contaminated runway.

The result was a longer-than-normal landing and landing roll.

Contributing to the occurrence were a tailwind component, inaccurate James Brake Index (JBI) tables, crew decision making, and the company’s use of landing performance tables different from those produced by the aircraft manufacturer for contaminated runways.