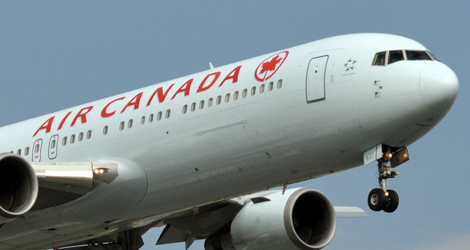 Air Canada flight ACA878 departed Toronto/Lester B. Pearson International Airport, Ontario (CYYZ), on 13 January 2011 at 2138 1 with 95 passengers, 6 flight attendants and 2 flight crew. The planned routing was north of the North Atlantic Organized Track System (OTS) on a random track 2 in order to avoid forecast turbulence associated with the jet stream. The captain had elected to use the centre line option as per the strategic lateral offset procedures 3 (SLOP) in the Air Canada Flight Operations Manual (FOM).

At 0040, the first officer (FO) expressed the need for a rest. The captain agreed and the FO commenced a controlled rest. The in-charge flight attendant (IC) was not advised. Shortly after the start of the controlled rest, the captain increased the lighting on the flight deck to review aircraft manuals in preparation for upcoming training.

This type of reading was in accordance with Air Canada standard operating procedures.

At 0118, the captain turned on the seatbelt sign in anticipation of the turbulence forecast for the area. An announcement by the IC was made to remind passengers that the seatbelt sign was now on and that they were to remain seated with their seatbelts secured.

Up to this point, there had been no turbulence; after the event, it was light to nil. In response to the seatbelt sign being turned on, the flight attendants made a visual inspection of the passengers for compliance; the majority were asleep. Many of the passengers in economy were lying down across the centre 3 seats. Business class featured the lay-flat seats with seatbelts equipped with air bags, and the majority of those passengers were also lying down and appeared to be asleep.

At 0155, the captain made a mandatory position report with the Shanwick Oceanic control centre. This aroused the FO.

The FO had rested for 75 minutes but reported not feeling altogether well. Coincidentally, an opposite-direction United States Air Force Boeing C-17 at 34 000 feet appeared as a traffic alert and collision avoidance system (TCAS) target on the navigational display (ND).

The captain apprised the FO of this traffic.

Over the next minute or so, the captain adjusted the map scale on the ND in order to view the TCAS target and occasionally looked out the forward windscreen to acquire the aircraft visually. The FO initially mistook the planet Venus for an aircraft but the captain advised again that the target was at the 12 o’clock position and 1000 feet below.

The captain of Air Canada ACA878 and the oncoming aircraft crew flashed their landing lights.

It was at this time the oncoming aircraft passed beneath Air Canada ACA878.

The TCAS did not produce a traffic or resolution advisory. During the pitch excursion, the aircraft pitch changed from the cruise attitude of 2 degrees nose up, to 6 degrees nose down followed by a return to 2 degrees nose up. The vertical acceleration forces (g) went to -0.5 g to +2.0 g in 5 seconds. Computed airspeed increased 7 knots then decreased 14 knots before recovering to cruise speed with the aircraft’s altitude decreasing to 34 600 feet increasing to 35 400 feet and finally recovering to 35 000 feet.

1. The interrupted sleep obtained by the first officer prior to the flight increased the likelihood that rest would be needed during the overnight eastbound flight.

3. The first officer was experiencing a circadian low due to the time of day and fatigue due to interrupted sleep which increased the propensity for sleep and subsequently worsened the sleep inertia.

4. By identifying the oncoming aircraft, the captain engaged the first officer (FO) before the effects of sleep inertia had worn off.

5. Under the effects of sleep inertia, the first officer perceived the oncoming aircraft to be on a collision course and pushed forward on the control column.

6. The frequency of training and depth of the training material on fatigue risk management to which the flight crew were exposed were such that the risks associated with fatigue were not adequately understood and procedures for conducting controlled rest were not followed by the flight crew.

7. Although the seatbelt sign was on and an announcement about potential turbulence was made, several passengers were injured during the event because they were not wearing their seatbelt.