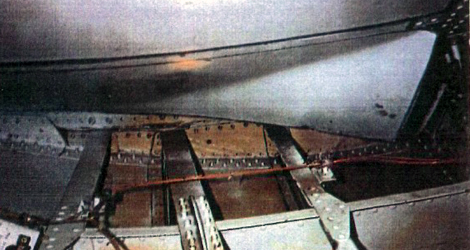 The aircraft was operating scheduled Air Canada Flight AC866 from Montreal Mirabel to London Heathrow. At approximately 0625 hrs, as the aircraft was approaching the area of Manchester at FL 370, the second officer made a public address (PA) broadcast to the passengers advising them that the aircraft was about to descend and that they could expect to land in about 30 minutes. He also reset the pressurization controller in preparation for the descent, causing the cabin pressure altitude to descend slowly from 7,000 feet to 6,300 feet during the following three minutes. Meanwhile the first officer of Air Canada Flight AC866 had requested descent clearance from air traffic control (ATC) on the airways control frequency in use and had been instructed to change frequency to the next airways sector for descent clearance.

Just after he had made this frequency change, a rapid loss of cabin pressurization occurred. None of the three pilots heard any noise, but all were aware of a sudden change in airflow and ventilation on the flight deck. The first officer immediately transmitted a request for descent clearance on the new frequency and then donned his oxygen mask. The commander felt his ears ‘pop’ and, thinking that this was due to movement of the outflow valves in response to the small pre-descent increase in cabin pressure differential, he disengaged the autopilot and allowed the aircraft to descend 100 – 200 feet. He then saw the first officer put on his oxygen mask and the second officer operating the pressurization controls, so he handed control of the aircraft to the first officer, put on his own mask, and resumed control of Air Canada Flight AC866.

He was aware that at some time during this sequence of events the cabin altitude warning horn sounded. He was also aware that, in response to the first officer’s earlier request, clearance to descend had been passed by ATC.

Accordingly, he called for the emergency descent checklist, selected cabin signs and continuous ignition ‘ON, closed the throttles, extended the speed brakes and accelerated the aircraft to maximum operating speed (VMO). The second officer also donned his oxygen mask and completed the loss of cabin pressure checklist, but was unable to reduce the cabin altitude rate of climb, which was showing maximum rate.

The first officer of Air Canada flight AC866 stated that, after donning his oxygen mask and completing the essential communications with ATC, he pressed the PA microphone switch and made an announcement saying “ATTENTION. PUT ON YOUR OXYGEN MASKS IMMEDIATELY“, repeating these words twice.

In the passenger cabin, two flight attendants at the rear of the aircraft had heard a loud ‘boom’ and a sound of rushing air from the left-hand rear toilet. They signalled to the cabin service director (CSD), who joined them and tried to open the toilet door, but without success.

As Air Canada Flight AC866 descended through FL310 the first officer declared an emergency to ATC, explaining that the aircraft had suffered a rapid decompression and was in emergency descent. ATC responded by advising that there were no restrictions on either height or heading. The commander later recollected that when the second officer told him that the cabin altitude had risen to 19,000 feet the aircraft was passing that same height in their descent.

Analysis of the flight data recorder showed that the cabin altitude peaked at 20,600 feet, before beginning to reduce again with aircraft altitude.

During the descent the airspeed of Air Canada Flight AC866 peaked at 377 kt and the rate of descent reached 8,500 feet per minute for a short time.

The aircraft descended to 18,000 feet in a little over 3 minutes and levelled at 10,000 feet some 5 minutes and 20 seconds after the loss of pressurization. Cabin altitude was above 18,000 feet for approximately 2 minutes and 18 seconds. When the aircraft was level at 10,000 feet the commander used the PA to call the CSD to the flight deck. The flight attendants took this as a sign that it was safe to resume their duties. Only one flight attendant remembered hearing an announcement that oxygen was no longer required. The CSD went to the flight deck where he told the commander about the noise from the rear toilet area, and the commander advised him not to try to open the toilet door. The CSD then checked the condition of the passengers and found that three were experiencing severe headache and earache, but the remainder were suffering no physical distress.

The aircraft continued to make a normal approach and landing at Heathrow Airport, where it was met by medical attendants with wheelchairs for the most affected of the passengers.

The sudden cabin depressurization was caused by a localised rupture of the rear pressure bulkhead, behind the aft/left toilet compartment, which occurred as a result of fatigue cracking which had initiated due to the following factors: