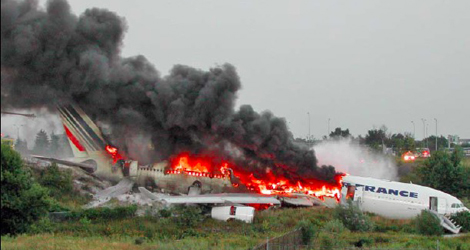 Before departure, the flight crew members obtained their arrival weather forecast, which included the possibility of thunderstorms.

On final approach, they were advised that the crew of an aircraft landing ahead of them had reported poor braking action, and Air France Flight 358s aircraft weather radar was displaying heavy precipitation encroaching on the runway from the northwest.

During the flare, the aircraft travelled through an area of heavy rain, and visual contact with the runway environment was significantly reduced. There were numerous lightning strikes occurring, particularly at the far end of the runway.

Air France flight AF358 touched down about 3800 feet down the runway, reverse thrust was selected about 12.8 seconds after landing, and full reverse was selected 16.4 seconds after touchdown. The aircraft was not able to stop on the 9000-foot runway and departed the far end at a groundspeed of about 80 knots. The aircraft stopped in a ravine at 2002 UTC (1602 eastern daylight time) and caught fire. All passengers and crew members were able to evacuate the aircraft before the fire reached the escape routes. A total of 2 crew members and 10 passengers were seriously injured during the crash and the ensuing evacuation.

Air France flight AF358 touched down approximately 3800 feet down the 9000-foot runway and was not able to stop on the remaining runway. It departed the end of the runway at a groundspeed of approximately 80 knots and came to rest in a ravine.

1. The crew conducted an approach and landing in the midst of a severe and rapidly changing thunderstorm. There were no procedures within Air France related to distance required from thunderstorms during approaches and landing, nor were these required by regulations.

2. After the autopilot and autothrust systems were disengaged, the pilot flying (PF) increased the thrust in reaction to a decrease in the airspeed and a perception that the aircraft was sinking. The power increase contributed to an increase in aircraft energy and the aircraft deviated above the glide path.

3. At about 300 feet above ground level (agl), the surface wind began to shift from a headwind component to a 10 knots tailwind component, increasing the aircrafts groundspeed and effectively changing the flight path. Air France flight AF358 crossed the runway threshold about 40 feet above the normal threshold crossing height.

4. Approaching the threshold, the aircraft entered an intense downpour, and the forward visibility became severely reduced.

5. When Air France flight AF358 was near the threshold, the crew members became committed to the landing and believed their go-around option no longer existed.

6. The touchdown was long because the aircraft floated due to its excess speed over the threshold and because the intense rain and lightning made visual contact with the runway very difficult.

7. The aircraft touched down about 3800 feet from the threshold of Runway 24L, which left about 5100 feet of runway available to stop. The aircraft overran the end of Runway 24L at about 80 knots and was destroyed by fire when it entered the ravine.

8. Selection of the thrust reversers was delayed as was the subsequent application of full reverse thrust.

9. The pilot not flying (PNF) of Air France flight AF358 did not make the standard callouts concerning the spoilers and thrust reversers during the landing roll. This further contributed to the delay in the PF selecting the thrust reversers.

10. Because the runway was contaminated by water, the strength of the crosswind at touchdown exceeded the landing limits of the aircraft.

11. There were no landing distances indicated on the operational flight plan for a contaminated runway condition at the Toronto/Lester B. Pearson International Airport (CYYZ).

12. Despite aviation routine weather reports (METARs) calling for thunderstorms at CYYZ at the expected time of landing, the crew did not calculate the landing distance required for Runway 24L. Consequently, they were not aware of the margin of error available for the landing runway nor that it was eliminated once the tailwind was experienced.

13. Although the area up to 150 m beyond the end of Runway 24L was compliant with Aerodrome Standards and Recommended Practices (TP 312E), the topography of the terrain beyond this point, along the extended runway centreline, contributed to aircraft damage and to the injuries to crew and passengers.

14. The downpour diluted the firefighting foam agent and reduced its efficiency in dousing the fuel-fed fire, which eventually destroyed most of the aircraft.