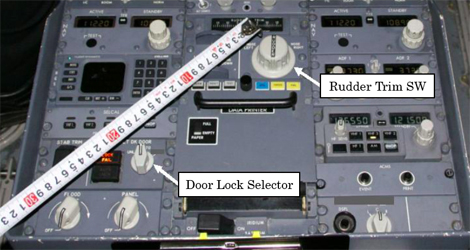 Air Nippon (now ANA) flight NH140 : on September 6 (Tuesday) 2011, a Boeing 737-700, registered JA16AN, operated by Air Nippon Co., Ltd., nosedived after having an unusual attitude (upset) at around 22:49 Japan Standard Time (JST: UTC+9hr, unless otherwise stated all times are indicated in JST) at an altitude of 41,000 ft about 69 nm east of Kushimoto while flying from Naha Airport to Tokyo International Airport as the scheduled flight 140 of the All Nippon Airways Co., Ltd.

There were 117 people on board the aircraft, consisting of the captain, the first officer, three cabin attendants and 112 passengers. Of these people, two cabin attendants sustained slight injuries.

There was no damage to the aircraft.

It is highly probable that this serious incident occurred in the following circumstances: during the flight, the first officer erroneously operated the rudder trim control while having an intention of operating the switch for the door lock control in order to let the captain reenter the cockpit.

The first officer’s recognition of the unusual situation was delayed and his subsequent recovery operations were partially inappropriate or insufficient; therefore, the aircraft attitude became even more unusual, causing the aircraft to lose its lifting force and went into nosedive.

Air Nippon (now ANA) flight NH140 : the FO received a signal for entry from the PIC , hurriedly operate the Door Lock Selector while he was operating the CDU, and this contributed to his erroneous operation.

This led to a situation which is equivalent to “a case where aircraft operation is impeded.”

It is somewhat likely that this resulted from lack of effectiveness in the current system for determining the differences training contents and its check method, under which the Air Nippon Co., Ltd. and other airlines considered and adopted specific training programs to train pilots about how to operate the flight deck switches when their locations changed and the Civil Aviation Bureau of the Ministry of Land, Infrastructure, Transport and Tourism reviewed and approved them.

It is probable that the first officer’s failure to properly manage tasks contributed to his erroneous operation of the rudder trim control. It is somewhat likely that the similarities between the switches for the door lock control and the rudder trim control in their operability contributed to the delay in his recognition of the erroneous operation.

Moreover, he was excessively dependent on autopilot flight and he failed to be fully aware of monitoring the flight condition. It is somewhat likely that the first officer’s recovery operations were partially inappropriate or insufficient because he was startled and confused on the occurrence of an unexpected unusual situation in which the stick shaker was activated during the upset recovery maneuver.
It is somewhat likely that the followings contributed to his startle and confusion: he had not received upset recovery training accompanied with a stall warning and in unexpected situations, thereby he lacked the experience of performing duties in such situations before the serious incident, and he had not received upset recovery training at a high altitude.