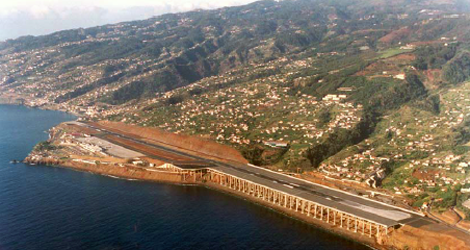 Airtours A321 G-VOLH in Funchal : departed Manchester on 18th April 2001, at 07:26 UTC hours,with 7 crew and 167 passengers on board, for a charter flight with Funchal Airport (Madeira Island) as destination.

The flight was an uneventful transit until the landing.

The aerodrome was clearly visible and the commander made a visual approach in accordance to the aerodrome STAR charts. The approach was stabilized, despite the aircraft encountering a windshear at GELO. At 30 feet RA the commander noticed that the aircraft had developed a high sink rate and he attempted to decrease the rate of descent with full aft side stick but the aircraft landed heavily and bounced.

At the second touch down the aircraft tail contacted the runway. The aircraft had suffered tail structural damage.

There were no personal injuries.

Airtours A321 G-VOLH in Funchal pitched down, full aft sidestick was re-applied for four seconds by which time the nose gear had contacted the runway. Thrust reverse and medium autobrake was used to slow the aircraft down to 50 kts at which point the reversers were stowed and the crew reverted to manual braking.

The investigation concluded that the marked backing of the wind, probably due to turbulence from the adjacent high ground, had caused the loss of headwind component.

The application of full aft side stick had reduced the vertical speed of the initial touch down. In an attempt to cushion the second touch down by maintaining a degree of aft side stick during the bounce, the aircraft had continued to pitch up beyond the aircraft geometry limit causing the tail section to contact the runway.