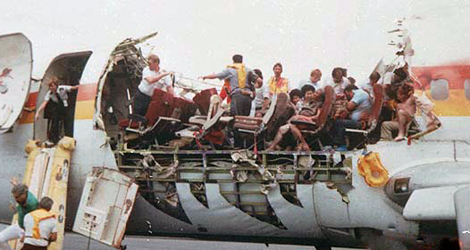 Aloha Airlines flight AQ243 : on April 28, 1988, an Aloha Airlines Boeing 737, N73711, based at the Honolulu International Airport, Hawaii, was scheduled for a series of interisland flights to be conducted under Title 14 Code of Federal Regulations (CFR) Part 121. A captain and first officer were assigned for the first six flights of the day with a planned first officer change to complete the remainder of the daily schedule.

At 1325, Aloha Airlines flight AQ243 departed Hilo Airport en route to Honolulu as part of the normal scheduled service. In addition to the two pilots, there were three flight attendants, an FAA air traffic controller, who was seated in the observer seat in the cockpit, and 89 passengers on board.

Passenger boarding, engine start, taxi, and takeoff were uneventful. The planned routing for Aloha Airlines flight AQ243 was from Hilo to Honolulu at flight level 240. Maui was listed as the alternate landing airport. The first officer conducted the takeoff and en route climb from Hilo. The captain performed the nonflying pilot duties. The first officer did not recall using the autopilot. The flight was conducted in visual meteorological conditions.

As the airplane leveled at 24,000 feet, both pilots heard a loud “clap” or “whooshing” sound followed by a wind noise behind them. The first officer’s head was jerked backward, and she stated that debris, including pieces of gray insulation, was floating in the cockpit.

The captain observed that the cockpit entry door was missing and that “there was blue sky where the first-class ceiling had been.”

The captain of Aloha Airlines flight AQ243 immediately took over the controls of the airplane. He described the airplane attitude as rolling slightly left and right and that the flight controls felt “loose.”

Because of the decompression, both pilots and the air traffic controller in the observer seat donned their oxygen masks. The captain began an emergency descent. He stated that he extended the speed brakes and descended at an indicated airspeed (IAS) of 280 to 290 knots.

Because of ambient noise, the pilots initially used hand signals to communicate.

The No. 1 flight attendant reportedly was standing at seat row 5. According to passenger observations, the flight attendant was immediately swept out of the cabin through a hole in the left side of the fuselage.

The No. 2 flight attendant, standing by row 15/16, was thrown to the floor and sustained minor bruises. She was subsequently able to crawl up and down the aisle to render assistance and calm the passengers. The No. 3 flight attendant, standing at row 2, was struck in the head by debris and thrown to the floor. She suffered serious injuries including a concussion and severe head lacerations.

The first officer of Aloha Airlines flight AQ243 said she tuned the transponder to emergency code 7700 and attempted to notify Honolulu Air Route Traffic Control Center (ARTCC) that the flight was diverting to Maui. Because of the cockpit noise level, she could not hear any radio transmissions, and she was not sure if the Honolulu ARTCC heard the communication. Although Honolulu ARTCC did not receive the first officer’s initial communication, the controller working flight 243 observed an emergency code 7700 transponder return about 23 nautical miles (nmi) south-southeast of the Kahalui Airport, Maui. Starting at 1348:15, the controller attempted to communicate with the flight several times without success.

When the airplane descended through 14,000 feet, the first officer switched the radio to the Maui Tower frequency.

The captain of Aloha Airlines flight AQ243 stated that he began slowing the airplane as the flight approached 10,000 feet mean sea level (msl). This maneuver is required as a routine operations practice to comply with ATC speed limitations. He retracted the speed brakes, removed his oxygen mask, and began a gradual turn toward Maui’s runway 02. At 210 knots IAS, the flightcrew could communicate verbally. The captain gave the command to lower the flaps. Initially flaps 1 were selected, then flaps 5. When attempting to extend beyond flaps 5, the airplane became less controllable, and the captain decided to return to flaps 5 for the landing.

Because the captain found the airplane becoming less controllable below 170 knots IAS, he elected to use 170 knots IAS for the approach and landing. Using the public address (PA) system and on-board interphone, the first officer attempted to communicate with the flight attendants; however, there was no response.

At the command of the captain, the first officer lowered the landing gear at the normal point in the approach pattern. The main gear indicated down and locked; however, the nose gear position indicator light did not illuminate. Manual nose gear extension was selected and still the green indicator light did not illuminate; however, the red landing gear unsafe indicator light was not illuminated. After another manual attempt, the handle was placed down to complete the manual gear extension procedure. The captain said no attempt was made to use the nose gear downlock viewer because the center jumpseat was occupied and the captain believed it was urgent to land the airplane immediately.

While advancing the power levers to maneuver for the approach, the captain sensed a yawing motion and determined that the No. 1 (left) engine had failed. At 170 to 200 knots IAS, he placed the No. 1 engine start switch to the “flight” position in an attempt to start the engine; there was no response.

A normal descent profile was established 4 miles out on the final approach.

The captain said that the airplane was “shaking a little, rocking slightly and felt springy.”

The captain said that he was able to make a normal touchdown and landing rollout. He used the No. 2 engine thrust reverser and brakes to stop the airplane. During the latter part of the rollout, the flaps were extended to 40° as required for an evacuation. An emergency evacuation was then accomplished on the runway.

After the accident, a passenger stated that as she was boarding the airplane through the jet bridge at Hilo, she observed a longitudinal fuselage crack. The crack was about halfway between the cabin door and the edge of the jet bridge hood.
She made no mention of the observation to the airline ground personnel or flightcrew.

The National Transportation Safety Board determines that the probable cause of this accident was the failure of the Aloha Airlines maintenance program to detect the presence of significant disbonding and fatigue damage which ultimately led to failure of the lap joint at S-10L and the separation of the fuselage upper lobe.

Contributing to the accident of Aloha Airlines flight AQ243 were :