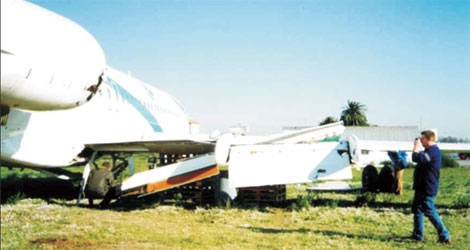 It was making a commercial flight, DLA 2708, from Venice to Barcelona with a crew of five and 39 passengers on board. Moments after the first contact of the wheels on touchdown on runway 25, the righthand landing gear of Alpi Eagles flight DLA 2708 suffered a phenomenon of shimmy vibration, of divergent amplitude, which in a few seconds caused the breakage of the main fitting of the right-hand main landing gear (RH-MLG).

The vibration was not damped, due to the low damping capacity of the shimmy damper caused by a defect of the component. After RH-MLG failure, the aircraft leaned to the right dragging the right hand wing tip and flap over the runway surface.

It run about 1,000 m over the paved surface crushing several runway edge lights, until Alpi Eagles flight DLA 2708 came to a halt in a grassy patch between two taxiways 100 m to the right of the runway centre line.

The crew and passengers evacuated the aircraft in an orderly manner via the evacuation slide of the forward right-hand service/emergency door. No fire was caused. The aircraft suffered considerable damage to the wing and the cowlings of the righthand engine, and also to the doors of the right-hand main landing gear leg.

Moments after the first contact of the wheels, a vibration commenced, the righthand main leg of the main landing gear collapsed.