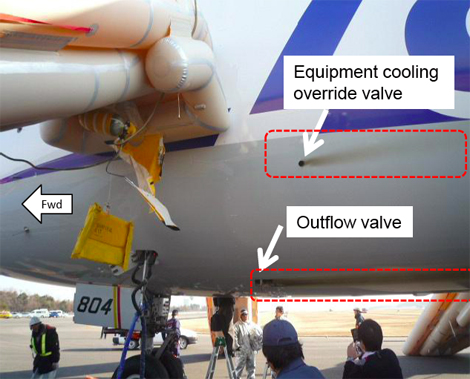 When it was climbing through 32,000 ft around FIATO (waypoint, over Imabari City) an instrument indication of battery failure came on at 08:27 accompanied by unusual smell in the cockpit.

The airplane diverted to Takamatsu Airport and landed there at 08:47. At 08:49 an emergency evacuation was executed on T4 taxiway.

The FO responded to the inquiry from Kansai Radar saying that: the cockpit situation remained the same with thin smoke possibly by an electric fire; the main battery had failed; there was a possibility of erroneous instrument indications; they need to land as soon as practicable.

The emergency evacuation was executed on Takamatsu Airport taxiway in the serious incident, which was a consequence of emergency landing deriving from the main battery thermal runaway during the airplane’s takeoff climb.

Internal heat generation in cell 6 very likely developed into venting, making it the initiating cell, resulting in cell-to-cell propagation and subsequent failure of the main battery.

It is very likely that cell 6 internal heat generation and increased internal pressure caused it to swell, melt the surrounding insulation material and contact the brace bar creating a grounding path that allowed high currents to flow through the battery box.

The currents generated arcing internal to the battery that contributed to cell-to-cell propagation consequently destroying the battery.
Cell 6 heat generation was probably caused by internal short circuit; however, the conclusive mechanism thereof was not identified. In the serious incident, the internal short circuit of a cell developed into cell heat generation, thermal propagation to other cells, and consequently damaged the whole battery.

The possible contributing factors to the thermal propagation are that the test conducted during the developmental phase did not appropriately simulate the on-board configuration, and the effects of internal short circuit were underestimated.