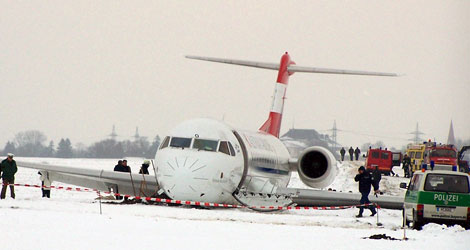 Austrian Airlines flight OS111 : on 5 January 2004 at 07:27 hrs 1 a Fokker 70 certificated in Austria departed from Vienna with four crew members and 28 passengers aboard for a scheduled flight to Munich.

It had been an uneventful flight until the airplane was transferred to the air traffic control unit Munich. Suddenly, at FL 90, heavy vibrations on the RH engine were indicated during the approach to airport Munich.

When additionally unusual noises were coming from the rear of the airplane, the crew declared an emergency due to severe engine problems and requested to be cleared for an immediate landing.

Thus the airplane was immediately cleared for a descent to 3,500 ft and by means of several heading instructions guided to a short approach of approximately 8 NM to the instrument landing system (ILS) of runway 26L.

The long flight duration in moderate icing in connection with low engine thrust contributed to the ice formation on the rotors of the low pressure compressors.

Because the airplane could not maintain the glide slope it touched down at 08:16:35 hrs approximately 2.5 NM short of the beginning of the runway on a snow covered field with the landing gears partially extended. After a sliding distance of 220 m, the airplane came to rest lying on its severely damaged fuselage.

All occupants were able to leave the airplane without assistance.

The accident was due to the following immediate causes: