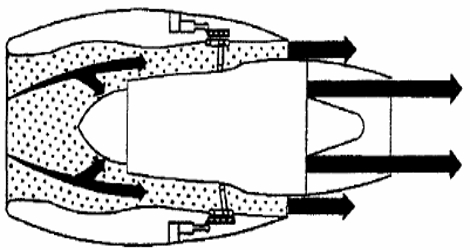 The AWAIR flight QZ730 departed from the Soekarno-Hatta International Airport of Jakarta (CGK). Block-off time was at 01.05 UTC or 08:05 LT, with an estimated time of arrival at its destination airport Sepinggan (Balikpapan) of 03:15 UTC or 11:15 LT

At the time of arrival an airport bomb threat and fire-fighting emergency training exercise was underway, scheduled to take place from 01:30 UTC until 05:00 UTC.

On arrival at its destination, and due to departing traffic, Air Traffic Control instructed the flight crew OF AWAIR flight QZ730 to use runway 07 Weather was reported as clear (Nil). Wind direction was 230O with a wind velocity of 8 knots.

During the landing roll the aircraft with a tailwind of approximately 8 knots, and while the cockpit crew was in the process of stowing the engines thrust reversers, both engines experienced engine flameout simultaneously.

With both engines inoperative, and using its remaining speed, the aircraft left Runway 07 entering taxiway B, where it came to a stop. The cockpit crew of AWAIR flight QZ730 reported executing the engine shutdown and fire-extinguishing procedures, meanwhile monitoring the engine gas temperature (EGT).

At about the same time Air Traffic Control informed the flight crew that engine #1 was on fire. The AWAIR flight QZ730 crew reported there was no fire warning, and that the Engine Gas Temperature, EGT, was increasing even after the fuel was cut-off. The cockpit crew concluded that apparently a tail pipe fire on both engines had occurred. The cockpit crew requested the assistance of a towing car to tow the aircraft to the parking place. Meanwhile the fire fighting was converging to the aircraft and starting to spray extinguishing foam into both the engine tail pipe nozzles.

All persons on board disembarked through the right forward door using the normal passenger stair, and the aircraft was towed to the parking are for baggage and cargo off-loading.