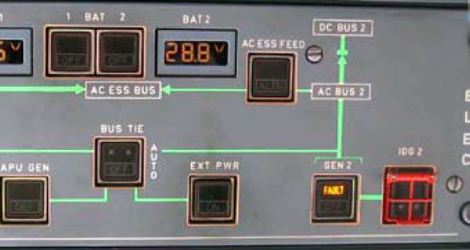 British Airways flight BA870 departed London Heathrow Airport at 1918 hrs on a scheduled night flight to Budapest, with 76 passengers and 6 crew on board. The incident occurred at 1926 hrs, as the aircraft was approaching FL 200 in the climb, in clear weather conditions.

The crew of British Airways flight BA870 reported that there was an audible ‘CLUNK’ and the flight deck suddenly became very dark, with a number of systems and flight information displays ceasing to function.

The following symptoms were reported:

The commander of British Airways flight BA870, who was in the left seat and was the Pilot Flying (PF), observed that both his and the co-pilot’s instrument displays had blanked. He retained control and flew the aircraft by reference to the external night horizon, the standby horizon and the standby altimeter. The standby instruments were poorly illuminated by what little cockpit lighting remained. The commander maintained the aircraft attitude, set manual thrust and continued the climb to FL 230, the last level to which he recalled having been cleared.

He tried to transmit a ‘MAYDAY’ call on the No 1 VHF radio; however, it was not received by Air Traffic Control (ATC) because the radio was no longer powered.

On the first attempt he inadvertently pushed the autopilot disconnect switch on his sidestick instead of the press-to-transmit button, but on hearing the aural alert ‘PRIORITY LEFT’ he realised his error and attempted to transmit again. The aircraft’s transponder signal was also lost, prompting ATC to attempt to contact the aircraft, but they received no reply.

The commander concentrated on flying the aircraft whilst the co-pilot worked sequentially through the checklist actions that had appeared automatically on the lower ECAM display. The pilots were using Active Noise Reduction (ANR) headsets and the loss of the flight interphone made communication between them difficult. The co-pilot had difficulty in identifying some of the switch locations on the overhead panel because of the lack of lighting, but was able to carry out the ECAM checklist actions. Emergency torches were available to the crew, but were not used.

Most of the affected systems were restored after about 90 seconds, when the co-pilot selected the AC ESS FEED push button switch to ‘ALTN’ (Alternate). This was the ninth or tenth line on the ECAM display.

The commander and co-pilot’s primary flight displays and navigation displays, the upper ECAM display, radio, transponder and most of the other affected systems were then recovered. The co-pilot continued the ECAM actions and the No 1 generator, which had dropped off line, was reset. The autothrust system was not reinstated and it was necessary to control the engine thrust manually for the remainder of the flight.

As communications were now re-established, the commander of British Airways flight BA870 transmitted a ‘PAN’ call to ATC advising them of the problems experienced with the aircraft; he was instructed to maintain the current altitude and heading. He then requested and was allocated a holding pattern, to allow the crew time to review the status of the aircraft. The commander handed over control of the aircraft to the co‑pilot, so that he could assess the situation.

Whilst in the hold, the cabin crew and passengers were briefed as to the situation and the Auxiliary Power Unit (APU) was started as a precaution so that its generator would be available to provide electrical power if required, but it was not used.

The commander recalled that the ECAM indicated that the following systems remained degraded or inoperative after selection of the AC ESS FEED switch and the reinstatement of the No 1 generator :

When the ECAM electrical system synoptic page was reviewed, everything appeared to be normal, with the exception of TR 1, which was highlighted in amber. The commander contacted the operator’s duty Maintenance Control (Maintrol) engineer on the VHF radio for technical advice. Communication was difficult and the aircraft remained in the hold for some 40 minutes while the commander and engineer exchanged information. The commander advised Maintrol that he believed the primary fault was the TR 1 and that the other failures were ancillary.

Much of the discussion was concerned with whether the flight should continue to Budapest. Maintrol advised that it should be possible to reset TR 1 on the ground and that onward dispatch for the next sector would be possible.

The commander of British Airways flight BA870 made the decision to continue the flight to Budapest.

He carried out the approach at Budapest and control was handed over to the co-pilot for the landing; this was a company Standard Operating Procedure (SOP). The windshield and the left side window had misted or iced over and therefore his forward view was restricted. The aircraft landed at Budapest at 2154 hrs; during the otherwise uneventful landing roll the crew observed a thrust reverser amber caution on the ECAM. The co-pilot taxied the aircraft to the terminal because of the restricted visibility on the commander’s side. After shutdown, the commander completed the technical log and had discussions with the local station engineer. He and the rest of the crew then left the aircraft.

He considered making a telephone call to the operator’s fleet office to advise them of the problems he had experienced but, because it was a Saturday night, he decided to leave it until a more convenient time.