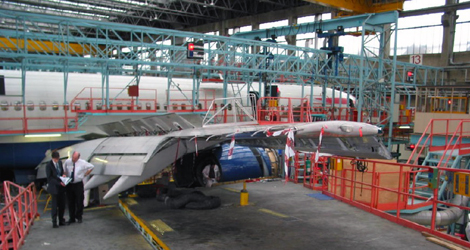 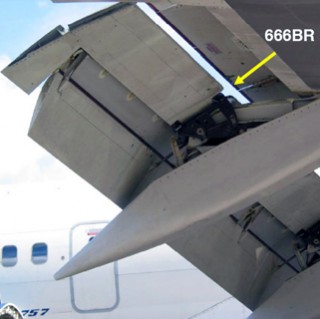 Shortly after takeoff on a scheduled passenger flight from London Heathrow to Paris, a hot oil smell, that had been present in the cockpit on engine startup, returned.

The flight crew donned oxygen masks and immediately diverted to London Gatwick Airport. During the autopilot-coupled ILS approach to Gatwick, the aircraft drifted to the right of the localiser after selection of Flap 30. When the autopilot was disconnected, a large amount of manual left roll control was needed to prevent the aircraft from turning to the right. It was necessary to maintain this control input until touch down. The aircraft landed safely despite these difficulties, with no injuries to any of the passengers or crew.

The investigation determined that the incident had been caused by maintenance errors that had culminated in the failure to reinstall two access panels, 666AR and 666BR, on the righthand outboard flap and incorrect procedures being used to service the engine oils. The events were the result of a combination of errors on the part of the individuals involved and systemic issues, that had greatly increased the probability of such errors being committed.

Sky Airlines flight MHS520 was operated with a Boeing B737-800 on 23 April 2005 with 189 passengers and seven crew members on board from Hurghada, Egypt, and should have arrived initially in Stuttgart, via Düsseldorf. According to a short term plan modification, Sky...
Read More