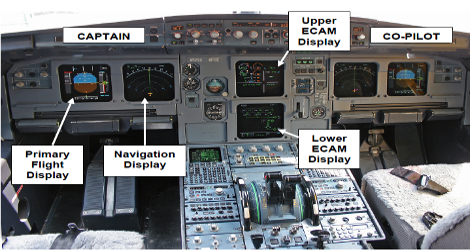 The BRITISH MIDLAND flight G-MEDJ suffered an electrical malfunction during a scheduled night flight between Khartoum (Sudan) and Beirut (Lebanon). The more significant symptoms included the intermittent failure of the captain and co-pilot’s electronic displays and the uncommanded application of left rudder trim, which was not annunciated to the fight crew.

The fight crew also reported that the aircraft did not seem to respond as expected to control inputs. A large number of ECAM messages and cautions were presented on the pilots’ electronic display units. The uncommanded rudder trim caused the aircraft to adopt a left-wing-low attitude and deviate to the left of the planned track. Normal functions were restored after the flight crew selected the No 1 generator to OFF in response to an ‘ELEC GEN 1 FAULT’ message. The aircraft landed safely at Beirut.

The No 1 generator was replaced, after which the fault did not recur. Damage was found on an electrical lead on the No 1 generator, but it could not be determined whether this had caused the symptoms experienced during the incident.

The BRITISH MIDLAND flight G-MEDJ  manufacturer notified operators of this incident by issuing OIT 999.0105/10 on 19 November 2010 and also updated the Quick Reference Handbook procedure for ‘Display Unit Failure’ to include a check of the rudder trim position.

The delay in this incident being reported meant that potentially useful information in non-volatile memory, both in systems and the voice and data recorders was not available to the AAIB investigation. The delay in being able to interview the fight crew might have reduced the quality of their accounts.
The incident appeared to have posed a number of challenges for the fight crew, in that they were presented with numerous and significant symptoms, including malfunctioning electronic displays and uncommanded rudder trim input, of which they were not aware, and the cause of which was not evident.

The ECAM did not clearly annunciate the root cause of the malfunction, nor were any fault captions observed on the overhead panel. No information or procedures were available to assist the fight crew in effectively diagnosing the problem.

The manufacturer concluded that the aircraft responded as expected to the rudder trim inputs, which suggests that the rudder input alone was responsible for the divergence from the intended fight path.

The ‘ELEC GEN 1 FAULT’ message during the incident, the resolution of the problem in fight when IDG1 was switched off and the lack of any further reported problems after IDG1 was replaced are good evidence that IDG1 had a fault which had affected aircraft equipment, causing the incremental rudder trim inputs.