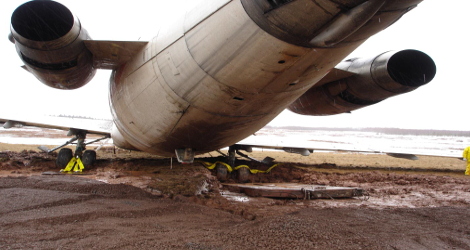 An Instrument Landing System approach was carried out and at 0307, Cargojet Airways flight CJT620 touched down on the 6150 foot long Runway 06.

Following touchdown, the flight crew of Cargojet Airways flight CJT620 were unable to stop the aircraft prior to the end of the runway.

The flight crew exited the aircraft using a ladder provided by the fire fighters : there were no injuries and the aircraft had minor damage.