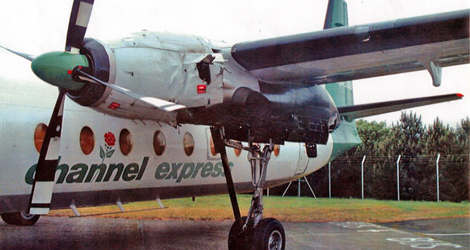 Channel Express Fokker F27 G-CEXF was operating its fourth sector of the morning, the first two sectors having been operated by a different crew. Prior to the first sector, the commander noted that the aircraft was experiencing a notable low frequency vibration, felt through the power levers and the airframe, just after engine start. A ground engineer was summoned on board the aircraft, and confirmed the presence of a vibration. At that time he suspected one blade of the propeller on the No l engine was slightly out of track at idle RPM.

The engines were shut down and a further detailed external inspection was carried out, including a satisfactory audible check of the turbines and compressor when rotating each propeller by hand. The commander restarted both engines and, although the vibration was still present, it was much reduced. It was noted that the vibration disappeared whenever the engines were operated above idle power.

The commander therefore satisfied himself that the aircraft was serviceable for the intended flights from Bournemouth to Jersey and return. Both sectors were completed normally with no further sign of the vibration. On return to Bournemouth, there was a crew change. The off-going commander briefed the on-coming commander on the vibration experienced earlier in the morning, but no entries were made in the aircraft’s Technical Log. After the event, the on-coming commander reported that he had not noted any unusual vibration at all during the outbound sector or the brief accident flight prior to the failure.

The on-coming commander was a Training and Fleet Captain for the F27 and was to conduct the first two sectors of Line Training with a new First Officer (FO), accompanied by an experienced ‘screen’ FO occupying the supernumerary seat. The trainee FO acted as non-handling pilot on the outbound cargo sector from Bournemouth to Jersey, which was completed uneventfully. He was the handling pilot for the positioning sector from Jersey back to Bournemouth.

Channel Express Fokker F27 taxied for departure from the full length of Runway 27 and, with the surface wind from 230° at 8 kt, the takeoff progressed normally. The aircraft became airborne approximately abeam the Control Tower and the landing gear was retracted normally. In accordance with the Standard Operating Procedures (SOPs), when passing 400 feet agl (670 feet amsl), some 17 seconds after lift off, the first officer requested ‘climb power’ and the commander then proceeded to reduce the fuel trimmers towards the climb power setting.

At this point the crew heard a loud ‘bang’ and the left engine Fire Warning activated.

The FO continued to control the aircraft, keeping it straight against the potential yaw and maintaining a climb profile. The commander initiated the engine fire drill for the left engine, which involved putting the propeller lever to the Feather position, pushing the Feathering Button and pulling the Fuel Shut-Off Handle. Shot 1 of the left engine Fire Extinguishers was then activated. A few seconds later, the Fire Warning ceased, so the commander elected not to use Shot 2. He instructed the first officer to climb to 1,500 feet and make a left turn to conduct a visual left hand circuit to land back at Jersey.

A MAYDAY call was made to Jersey Tower informing them of the problem and the commander’s intentions. On the downwind leg, the commander took over the handling of the aircraft and conducted a single engine approach and landing on Runway 27, which was carried out uneventfully. The aircraft landed using Flap 26° at 1050 hrs. The Airport Fire Service (AFS) had been notified and was in position when the aircraft landed. They confirmed that the fire had been extinguished and so the aircraft was taxied with an AFS escort to the parking area where it was shutdown normally. During the shutdown process, the Fuel Shut-Off Handle was inadvertently returned to ON causing some fuel to drain onto the ground. This was dealt with by the AFS personnel who also advised the crew of the spillage, following which the handle was returned to the OFF position.

The turbine break-up resulted in significant fuel leakage from the low pressure fuel pipe and this was the major fuel source for the fire, which posed a considerable hazard to the aircraft. The commander’s decision to fly a tight left hand circuit and land the aircraft as soon as possible was wise in the circumstances.