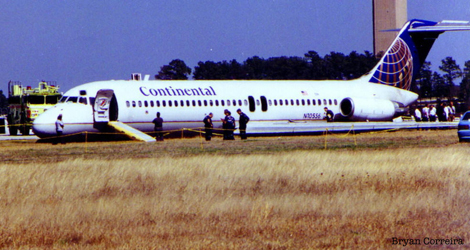 The airplane slid 6,850 feet before coming to rest in the grass about 140 feet left of the runway centerline.

The cabin began to fill with smoke, and the captain ordered the evacuation of the airplane.
There were 82 passengers, 2 flightcrew members, and 3 flight attendants aboard the airplane. No fatalities or serious injuries occurred; 12 minor injuries to passengers were reported.

The airplane sustained substantial damage to its lower fuselage. The regularly scheduled passenger flight was operating under Title 14 Code of Federal Regulations (CFR) Part 121 and had originated from Washington National Airport (DCA) about 3 hours before the accident.
An instrument flight rules (IFR) flight plan had been filed; however, visual meteorological conditions (VMC) prevailed for the landing in Houston. The accident occurred on the second leg of a 2-day 2-leg sequence for the reserve flightcrew. The captain flew the first leg on February 18, 1996, from IAH to DCA.

The flight departed IAH at 1745 and arrived in DCA at 2127 eastern standard time (EST). The flightcrew then had a 9-hour 23-minute rest period in Washington, D.C. The first officer performed pilot flying duties for the accident leg of the trip (flight 1943), which departed DCA at 0650 EST.

According to both the captain and the first officer, the takeoff, departure, and en route segments of the flight were uneventful.

At 0840:42, air traffic control (ATC) at Houston Center issued a clearance to flight 1943 to descend from the en route altitude of 35,000 feet to 13,000 feet mean sea level. The first officer began the descent, and at 0841:32, the cockpit voice recorder (CVR) recorded the captain reading the descent checklist.

At 0841:40, the first officer asked the captain to verify that the calculation of 132 knots as the target airspeed for the approach to IAH was correct, to which the captain replied in the affirmative. The descent checklist was called complete by the captain at 0842:03.

At 0845:31, the first officer called for the in-range checklist. The data from the digital flight data recorder (FDR) indicated that the airplane was descending through 19,000 feet at this time. Between 0845:37 and 0846:10, the captain referred to each of the seven items on the in-range checklist, in the correct order, except for the fourth item, “Hydraulics,” to which the captain did not refer. The first officer responded “checked set” to the third item, “Flight Instruments, Altimeters,” and “on” to the fifth item, “Shoulder Harness.” Flight 1943 received clearance to descend to 10,000 feet at 0847:12.

At 0848:39, the captain made initial contact with the Houston Terminal Radar Approach Control Arrival East controller and requested runway 27.

At 0855:27, the checklist was interrupted by the first officer informing the captain that he intended to use manual spoilers and 40o of flaps for the landing. The captain resumed completing the checklist at 0855:56, and accomplished the next three items before he was interrupted again at 0856:06, when the controller transmitted “Continental nineteen forty three, thirteen miles from the marker, maintain two thousand till established on the localizer, cleared ILS two seven approach.”

At 0857:02, the controller instructed flight 1943 to maintain a speed of 190 knots or faster to the outer marker and to contact the tower. According to the captain, the ATC request to maintain 190 knots or faster to the marker was not unusual at IAH on a visual flight rules (VFR) day. In his postaccident statement, the captain reported that at the time ATC made the request, the airplane’s indicated airspeed was approximately 210 knots, so no speed adjustment was necessary.

After making the landing public address (PA) announcement, the captain contacted the Houston Intercontinental Air Traffic Control Tower Local East controller, and at 0857:58, the flight was cleared to land.

At 0858:08, the captain said “now, where was I,” referred to the last two items on the approach checklist, and stated “approach check complete.” At 0858:48, the captain commented “aw shoot. I can’t play tennis when it’s like this… well maybe this afternoon it’ll clear up. actually I’ve still got a lot of time.”

Between 0859:14 and 0859:37, the captain engaged the first officer in nonessential conversation about the weather.

At 0859:50, the first officer initiated dialogue with the captain to clarify whether the controller had asked them to maintain 190 knots to the outer or middle marker. The discussion ended at 0900:00, when the first officer commented “heh” and then made two remarks, of which only a few words were intelligible on the CVR recording. In a written statement submitted to the Safety Board on January 27, 1997, the first officer reported that he had noticed the flap gauge indicating 0° at 0900:00 and that his subsequent remarks had been in reference to the flap gauge.

At 0900:13, after crossing the outer marker, the first officer called for the flaps to be extended to 15°. During an interview on February 20, 1996, and in his written statement dated February 27, 1996, the first officer indicated that at this point he realized that the flaps had not extended and touched the flap gauge to show the captain that it indicated zero. According to the captain, he responded by confirming that the flap handle was positioned to 15°.

Both the captain and the first officer recognized that the flaps had not extended after the flaps were selected to 15°.

At 0900:35, three intermittent sounds from the landing gear warning horn were produced, according to the first officer, by the captain rapidly moving the throttles back and forth.

At 0900:41, the first officer called for the landing checklist and the flaps to be extended to 25°.

At 0901:00, the first officer stated “* I don’t have any flaps.” In his postaccident statement, the captain reported that “the aircraft did not feel as though we had 50 flaps (didn’t balloon and aircraft didn’t slow).”

The CVR does not indicate that the landing checklist was ever started.

During postaccident interviews, neither pilot recalled seeing “any” landing gear indicator lights; both pilots recalled the gear handle being moved to the down position. The first officer stated that he did not hear the landing gear warning horn. The captain stated that he heard the horn sound momentarily and thought that it sounded because he put the flaps to 25° before the gear was down and locked.

According to FDR data, at 0900:58, the airplane was traveling at 216 knots indicated airspeed, approximately 504 feet above field elevation (AFE), and 34 seconds from touchdown.10

At 0901:02, the first officer stated “want to take it around?” and the captain replied “no, that’s alright. * keep your speed up here about uh.”

There was no compelling reason for the captain’s decision of Continental Airlines flight CO1943 to land the airplane; multiple signals and guidance indicated that the approach should be discontinued, as did Continental Airlines’ standard operating procedures

At 0901:13, the ground proximity warning system (GPWS) alerted “whoop whoop pull up” three times, and silenced at 0901:18. During the second GPWS alert, at 0901:15, the landing gear warning horn resumed sounding and continued to do so until after touchdown. According to the first officer, the captain reached up to the overhead panel as the GPWS was alerting. The captain did not recall doing this and stated that he had interpreted the GPWS alerts as a high sink rate warning.

The “A” flight attendant stated that after the airplane came to a stop, she entered the cockpit and informed the flightcrew that smoke was in the cabin. She observed the flightcrew shutting down the engines and returned to the cabin. When she heard, “easy victor, easy victor, go out the main cabin door,” she opened the left forward cabin exit, inflated the slide, and directed the passengers at the front of the cabin out this exit.

The accident occurred during the hours of daylight.
The airplane came to rest about 29°58’40” north latitude, 95°20’23” west longitude.

The National Transportation Safety Board determines that the probable cause of this accident was the captain’s decision to continue the approach contrary to Continental Airlines (COA) standard operating procedures that mandate a go-around when an approach is unstabilized below 500 feet or a ground proximity warning system alert continues below 200 feet above field elevation.