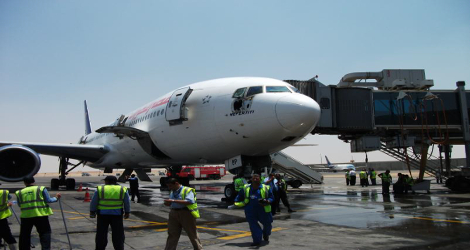 At almost 0711 UTC, and while waiting for the last passengers to board the aircraft, the F/O officer of Egypt Air flight MS667 reported that a pop, hissing sound originating from the right side of his seat was heard, associated with fire and smoke coming from the right side console area below F/O window #3 (right hand lower portion of the cockpit area).

The aircraft was still preparing for departure at Gate F7, Terminal 3 at Cairo Airport at the time the crew of Egypt Air flight MS667 detected the fire.

The Captain requested the F/O to leave the cockpit immediately and notify for cockpit fire.

The captain used the cockpit fire extinguisher bottle located behind his seat in attempt to fight and extinguish the fire.

The attempt was unsuccessful, the fire continued in the cockpit.

The F/O left the cockpit, he asked the cabin crew to deplane all the passengers and crew from the aircraft, based on captain’s order.

He moved to the stairs and then underneath the aircraft in attempt to find anyone with a radio unit but he could not. He returned to the service road in front of the aircraft and stopped one car and asked the person in the car to notify the fire department that the aircraft is burning on the stand F7 using his radio unit.

The cabin crew of Egypt Air flight MS667 deplaned the passengers using the two doors 1L and 2L. The passenger bridge was still connected to the entry doors that were used for deplaning

The first fire brigade arrived to the aircraft after three minutes.

The fire was extinguished.  Extinguishing actions and cooling of the aircraft were terminated at 0845 UTC (1045 Cairo local time).

The aircraft experienced major damage resulting from the fire and smoke.

Electrical fault or short circuit resulted in electrical heating of flexible hoses in the Egypt Air flight MS667 crew oxygen system. (Electrical Short Circuits; contact between aircraft wiring and oxygen system components may be possible if multiple wire clamps are missing or fractured or if wires are incorrectly installed).