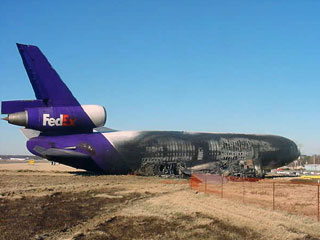 Of the two flight crewmembers and five nonrevenue FedEx pilots on board the airplane, the first officer and one nonrevenue pilot received minor injuries during the evacuation.

watch the video of fire and evacuation of Federal Express flight FX647.

The postcrash fire destroyed the airplane.s right wing and portions of the right side of the fuselage. Flight 647 departed from Metropolitan Oakland International Airport (OAK), Oakland, California, about 0832 (0632 Pacific standard time) and was operating under the provisions of 14 Code of Federal Regulations (CFR) Part 121 on an instrument flight rules flight plan.