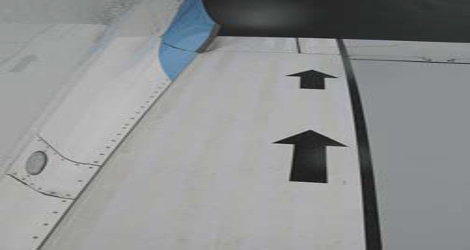 The FLYBE flight BE484 from Manchester to Belfast was a scheduled passenger transport fight with the No 2 air conditioning pack inoperative, as permitted by the Minimum Equipment List (MEL).

Whilst en route, a failure of the No 1 Air Cycle Machine (ACM) occurred, releasing smoke and fumes into the aircraft.

A MAYDAY was declared and an expeditious diversion was carried out.

After donning oxygen masks the pilots of FlyBe flight BE484 had great difficulty communicating with each other, ATC and cabin crew, because of technical problems with the masks.

During the emergency evacuation the right overwing emergency exit door became jammed and unusable. Passengers who evacuated via the left overwing exit were unaware of how to get from the wing down to the ground. Two Safety Recommendations are made as a result of this investigation.

The commander’s decision to divert to the Isle of Man was based on his concern that there might have been a fire on the aircraft.

The sulphurous smell experienced by both pilots was something that they had never encountered on an aircraft before, but one which they uniquely associated with burning.

Having made the decision to divert, the commander had limited time in which to achieve a straight-in approach and landing. This task was made more difficult by the communication difficulties experienced once the pilots had donned their oxygen masks.

Consequently, the commander of FlyBe flight BE484 omitted to inform the SCCM that they were diverting and it also led to his decision not to attempt to speak to the passengers over the PA.

The fluctuating intensity of the smell meant that the commander did not decide to perform an emergency evacuation until late in the fight.

His intentions were not communicated to the cabin crew and passengers and they were therefore surprised by the command to evacuate.

However, despite the unexpected nature of the order to evacuate, this did not delay its commencement.