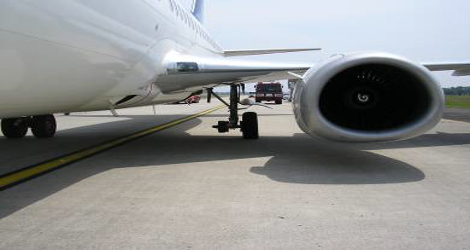 On 30 October 2009, Garuda Indonesia flight GA142, operated with a Boeing B737-300 registered PK-GGQ, was being flown on a scheduled passenger service from Soekarno–Hatta Airport, Jakarta to Sultan Iskandar Muda Airport, Banda Aceh, via Polonia Airport, Medan.

There were 55 persons on board; two pilots, four flight attendants, and 49 passengers. The pilot in command (PIC) was the handling pilot, and the copilot was the support/monitoring pilot for the flight.

Garuda Indonesia flight GA142 took off from Jakarta runway 07L at 0129 UTC. During the takeoff, the number-two wheel separated from its axle and fell from the aircraft onto the runway.

The flight proceeded outbound from Jakarta, climbing to flight level (FL) 320, and tracking in accordance with radar vectors from the Jakarta Approach Controller. At 0131 the controller instructed the crew to stop the climb at FL 100, and informed the crew that one of the aircraft’s main wheels had fallen from the aircraft onto the runway during the takeoff.
The crew subsequently levelled off at 10,000 feet.

The PIC decided to return to base (Jakarta), and proceeded to a holding point at 6,000 feet, and held for about 90 minutes to burn fuel, before landing at Soekarno-Hatta Airport, Jakarta.

Shortly after finding the aircraft wheel on the runway shoulder, the ATC closed runway 07L for about 6 minutes to perform runway sweeping to clean it of any foreign objects.

Before landing, the PIC elected to conduct a flight along runway 07L at 200 feet for an air traffic control (ATC) observation of the landing gear. The controller confirmed that the number-two main wheel was not on the aircraft. The PIC informed the controller that they would land the aircraft on runway 07L from the subsequent approach. The controller informed the airport rescue and fire fighting service (RFFS) and RFFS personnel and vehicles stood by during the landing.

The PIC taxied the aircraft off the runway and stopped it on taxiway NP. The passengers disembarked normally via airstairs about 15 minutes after the landing. The RFFS crews were standing by the aircraft in case of fire. None of the aircraft’s occupants were injured.

The aircraft was subsequently towed to a remote area on the airport apron for inspection.