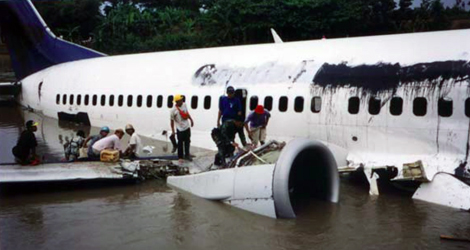 On January 16, 2002, at approximately 09:24 UTC, Garuda Indonesia flight GA421 , a Boeing 737-300, PK-GWA, ditched into the waters of the Bengawan Solo River, Central Java during a forced landing, following loss of power on both engines as the aircraft was descending through 19,000 ft. The dual engine flame out occurred shortly after the aircraft entered severe cumulonimbus cloud formations with turbulence and heavy rain and ice.

The aircraft, Garuda Indonesia flight GA 421, had departed Ampenan at 08:32 UTC, on a regular scheduled commercial flight with destination Yogyakarta. At departure VMC conditions prevailed. The flight from Ampenan was reported uneventful until its arrival in the Yogyakarta area. The crew of Garuda Indonesia flight GA421 stated that they observed cumulonimbus cloud formations on their weather radar. The aircraft descended from cruise altitude of 31,000 ft to 28,000ft as instructed by BALI ATC at 09.08 UTC due to traffic on eastbound at FL290. As they began their descent from FL 280 at 09.13 UTC, prior to entering the clouds at 23,000 feet, the crew noted at the radar screen red cells with two green and yellow areas to the left and right of their intended flight path.

The Pilot Flying decided to take the left opening above PURWO NDB. The flight crew prepared to enter turbulence by setting turbulence speed at 280 knots, seatbelt on, engine ignitions on FLT and anti-ice on. Then the Pilot Flying requested to BALI ATC to descend to FL 190 and was cleared by Semarang APP at 09.13 UTC. Shortly after the aircraft entered the area covered by Cumulonimbus cells, the crew noted severe turbulence and heavy precipitation. According to the flight crew interview, the crew noted aircraft electrical power generators loss and they were only having primary engine instrument indications and captain flight instruments, which finally identified both engines flame-out.

Garuda Indonesia flight GA421 was in heavy precipitation (most likely a mix of rain and hail) for approximately one and a half-minute before the CVR stopped. The stoppage of the recording indicates that the CVR stopped due to loss of AC power.

While in the precipitation, the flight crew of Garuda Indonesia flight GA421 attempted at least two engine relights, and one attempt of APU start. As the APU start was initiated, the crew noted total electrical loss of the aircraft. The aircraft descended into VMC conditions at about 8,000 ft altitude. The PIC spotted the Bengawan Solo River and decided to land the aircraft on the river. The crew announced to the flight attendant to prepare emergency landing procedure.

The aircraft landed successfully between two iron bridges in the upstream direction, and came to a stop with its nose pointing to the right of the landing path. The aircraft settled down on its belly, with the wings and control surfaces largely intact, and was partially submerged. The evacuation following the landing was successful. Twelve passengers suffered injuries, the flight crew and two flight attendants were uninjured, one flight attendant suffered serious injuries, and another flight attendant was found in the waters of the river and fatally injured.

The NTSC determines that the probable causes of the accident were the combination of :