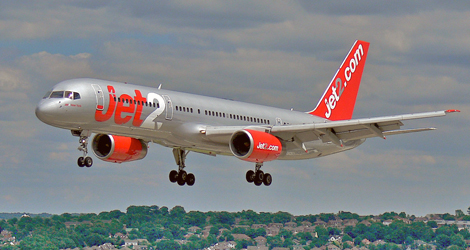 On Tuesday, 7 August 2012, a Boeing 757-21B aircraft, registration G-LSAH, was on JET 2 flight LS224 en route to the Leeds Bradford Airport (LBA) in the United Kingdom from the Tenerife South Airport (TFS).

It had previously made the flight in the opposite direction, landing at the Tenerife South Airport at 14:02 h, where it was processed by its handling operator.

At about 14:15 h maintenance personnel were contacted when a problem was detected with a service connection for the aft bathrooms. The drain valve had detached from its housing on the service panel and was hanging by the elastic sealant material, which was making it impossible to drain the water. After removing the detached valve and entering this task in the airplane’s maintenance log, the airline was informed so that it could plan the repair and the aircraft was returned to service, though the aft bathrooms remained inoperable.

It was under these conditions that the airplane left Tenerife at 15:15 h with 7 crew and 222 passengers on board. Some 25 NM northeast of the airport, while climbing through FL 230, having been cleared to a cruise level of FL 360, the crew received an EICAS “CABIN ALT” warning, informing of a pressurization problem.

The crew carried out the depressurization procedure and made an emergency descent to an altitude of 10,000 ft AMSL, having donned their oxygen masks. Since the pressure in the passenger cabin could not be controlled manually, the passengers’ oxygen masks dropped automatically, though some masks did not drop, which required the intervention of the flight attendants.

Once they reached a safe altitude, the crew headed to point BAMEL where they circled in order to burn fuel and reduce the airplane’s weight to the maximum authorized landing weight (89,811 kg).

They eventually landed uneventfully at TFS at 16:27.
No one on board was injured and the airplane suffered no additional damage.

The depressurization of Jet 2 flight LS224 took place in the area of the detached valve and that the valve had deteriorated as a result of corrosion.

It may be concluded that the aircraft experienced an in-flight depressurization due to an air leak through the area where the deteriorated drain valve for the aft bathrooms was located.

This was caused due to an improper action of maintenance, without taking into account the relevant documentation on aircraft maintenance or the process for deferring items.

The acceptance by the flight crew of the maintenance measures taken on the ground was a determining factor in the incident.

The shortage of telephone and computer resources and the absence of technical instructions, added to the self-induced pressure not to cause any delays, contributed to the eventual outcome of the incident.