Jet Blue Airways, Inc., was operating the airplane as a scheduled domestic passenger flight under the provisions of 14 Code of Federal Regulations (CFR) Part 121. The airline transport pilot licensed captain, first officer, 4 flight attendants, and 141 passengers were not injured. The flight departed Burbank, California, at 1531 as a non-stop to JFK Airport, New York, New York. Visual meteorological conditions prevailed, and an instrument flight rules (IFR) flight plan had been filed.

The first officer (FO) of Jet Blue Airways flight JBA292 was the pilot flying. He noted no problems during the initial departure, and observed a positive rate of climb. Information from the digital flight data recorder (DFDR) indicated that after liftoff the gear handle was positioned to the up position.

The DFDR data then indicated that the gear handle was positioned to the down position. The crew of Jet Blue Airways flight JBA292 then received an error message of a fault for the nose wheel steering (WHEEL N/W STRG FAULT). There was no master warning so the FO continued flying the airplane while the captain troubleshot the ECAM system.

The FO flew the airplane over Palmdale, California, at 14,000 feet mean sea level (msl) while the captain consulted the flight crew operating manual (FCOM) and maintenance control. The FCOM noted that the nose gear “may be caught at 90 degrees.” The captain continued to evaluate the problem to ascertain the systems’ status. The flight crew continually updated the cabin crew and passengers.

Jet Blue Airways flight JBA292 diverted to Long Beach, California. The captain decided to perform a flyby of the tower for verification on the gear status.

The tower, Jet Blue ground personnel, and a local news helicopter advised him that the nose gear was canted 90 degrees to the left. The captain stated that after discussing the situation with company representatives, he decided to divert to LAX because it had optimum field conditions, runway length, and a better emergency/abnormal support services. The crew flew for several hours to burn fuel so that they could land at a lighter weight.

The captain of Jet Blue Airways flight JBA292 took note of the fuel burn to ensure that the center of gravity stayed within limits. The captain also advised the cabin crew that in the event that the nose gear collapsed, evacuation from the aft doors was not available so everyone would deplane from the forward exits. The flight crew advised the cabin crew to take the emergency procedures up to the point of egress, at which time the captain would advise the method.

Prior to touchdown, the captain announced “brace” and the flight attendants also transmitted “brace” over the public address system.

The captain flew the airplane for the landing. He touched down at 120 knots, and applied normal braking at 90 knots. He held the nose gear off of the ground as long as possible. At 60 knots, the flight crew shut down the engines. They did not use ground spoilers, reverse thrust, or auto braking. During the landing, the forward cabin crew could smell burnt rubber. 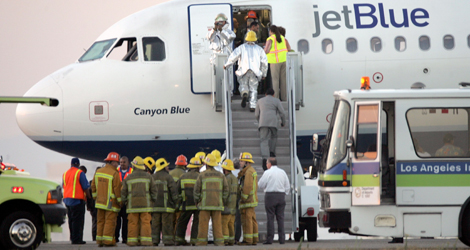 The cabin crew remained at their stations as previously defined by the captain. The air traffic control tower confirmed that there was no fire, and the captain announced this to the cabin crew. After this notification, the passengers deplaned normally using an air stair.

Upon touchdown, the NLG tires rapidly deflated and tore apart, and both wheels were worn into the axle. During landing, the airplane’s trajectory was not affected by the abnormal NLG configuration or subsequent tire destruction, and the airplane stayed on the runway centerline.

PIA Pakistan Airlines flight PK8303 crashed short of a runway in Karachi Airport, over a residential area, on May 22, 2020. It was a domestic flight from Lahore and it was operated with an Airbus A320-214 registration AP-BLD. 99 people were on board, 2 passengers...
Read More