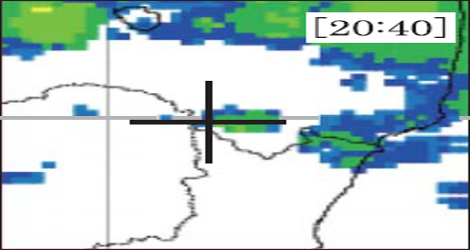 The history of the Korean Air flight KAL2711 is summarized as below, based on the data from onboard digital flight data recorder (DFDR), the air traffic control (ATC) communication records and the statements of the pilot in command (PIC), the first officer (FO), two flight attendants and an injured passenger.

On July 5, 2012 at 19:11 Japan Standard Time (JST, UTC+9 hours), a Boeing 747-400, registered HL7473, operated by Korean Air Lines Co, Ltd. took off from Gimpo International Airport (the Republic of Korea) for Tokyo International Airport (Japan) as a scheduled Korean Air flight KAL2711, with 194 persons on board, consisting of the PIC, the FO, 15 flight attendants and 177 passengers.

Because the turbulence was expected on the Korean Air flight KAL2711 route 50 minutes to one hour and 14 minutes after the take-off, the PIC provided this information to the flight attendants at the pre-flight briefing and assured their duties in case of actual turbulence.

The fasten seat-belt sign had been illuminated until the aircraft reached the cruising altitude due to light shaking.

Shaking stopped when it started cruising flight and the fasten seat-belt sign was turned off.

Later with the onset of light shaking, it was turned on again.

The aircraft left the cruising altitude for descent in visual meteorological conditions (VMC).

Light shaking continued. As the onboard weather radar (in auto calibrated mode with the range setting at 80 nm and the tilt angle at -1°) showed no echo on the display, the fasten seat-belt sign was turned off.

Several minutes later, the aircraft encountered a sudden violent shaking for two to three seconds; accordingly, a passenger standing in the aisle to go to the lavatory was thrown off-balance, bumped into the L4 door on the back, and fell on the floor.

The only significant vertical acceleration changes (an increase to +1.54G followed by a decrease to +0.34G in two seconds) recorded in the DFDR took place around 20:30 (one hour and 19 minutes after the takeoff), while the aircraft was in a right turn descent.

Two flight attendants assisted the passenger return to his seat and then asked the PIC to get him a wheelchair for his disembarkation.

The aircraft encountered no violent shaking after that and it landed at Tokyo International Airport at 20:58.

The passenger walked out of the aircraft and rode in the wheelchair. He went through immigration and customs clearance, but due to continuous pains he was taken by ambulance to a hospital and diagnosed as a bone fracture.

It is highly probable that this accident occurred because the aircraft was shaken as it encountered turbulence during a descent, causing one passenger who was not in his seat to be thrown off-balance to sustain serious injuries.

It is probable that the turbulence was caused by VWS or unstable atmospheric conditions where convective clouds developed.