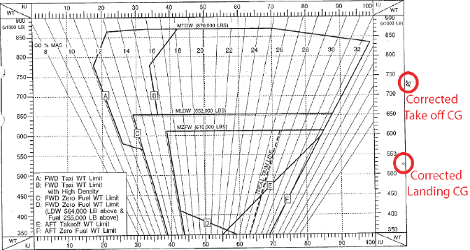 On 21 September 2004, at time 1302, a B747-400F operated by Korean Air was taking off from Oslo Airport Gardermoen for a KOREAN AIR flight KAL520 to Incheon International Airport, Seoul, Republic of Korea. During take-off run, the aircraft started to autorotate at approximately 120 Knots Calibrated Air Speed (KCAS) due to the actual Centre of Gravity (CG) being aft of the aft CG limit. The stabilizer remained steady as the aircraft continued to accelerate and became airborne at 165 KCAS and 11.5 degrees pitch attitude. After lift-off the nose attitude was increased to 12 degrees and then to 19 degrees. The Commander realised that the aircraft balance was wrong due to the far forward trim setting. The crew suspected a wrong CG location and contacted the company office through SATCOM. The crew was informed that the CG was out of limits for landing. A new CG location was received and the flight crew relocated some load pallets during flight. However, the CG was still aft of the aft limit. During the approach briefing, the landing configuration and performance parameters were discussed to reduce the possibility of a tail strike during touchdown and landing rollout. Emergency equipment was requested to stand by. During the landing rollout at RKSI, the aircraft nose lifted at 60 knots and nose wheel steering was lost. The Commander stopped the aircraft on the runway and shut down all engines. The aircraft was subsequently towed to the parking stand.

The wrong CG location was caused by a mistake during loading. During load planning the Load Master mistook the Standard Operating Mass (SOM) Centre of Gravity (CG) Mean Aerodynamic Chord (MAC) percent number for the Index Unit (IU) number. Hence the aircraft was misloaded to a CG of 37.8% MAC, which was 4.8 % aft of the aft limit of 33 % MAC. The mistake was not discovered by the Load Master, SAS Cargo or Korean Air Supervisor. Nor was the mistake discovered by the Commander who accepted and signed the cargo loading manifest before take-off.

The landing incident was investigated by the Korean Accident Investigation Board (KAIB) after the aircraft landed at RKSI.

The SAS Cargo Load Master mistook the percent MAC value for the IU value as a basis for the balance calculation.

The Load Master did not discover the error when reviewing his own calculations.

The Commander verified that the mass and CG values were within limits and did not discover the error regarding the wrong IU value when reviewing the calculations.

The KOREAN AIR flight KAL520 took off with the CG 4.8% MAC aft of the aft limit. This resulted in an early autorotation at 120 knots.

The commander chose to continue the takeoff and subsequently experienced excessive nose pitch up during take-off and climb.

The crew realized that the aircraft was tail heavy and contacted KAL OCC. Correct CG data was received and cargo was relocated to reduce the tail heaviness of the aircraft before landing.

The aircraft landed with the CG 7.2% MAC aft of the aft limit. At approximately 60 knots the nose wheel steering was lost due to nose pitch up.

The aircraft engines were shut down on the runway and towed to parking.

Korean Air’s pilot training curriculum does not include recurrent training in manual mass and balance calculations or simulator training for misloaded aircraft out of CG limits.

SAS Cargo had no official operating licence issued by CAA-N and there was no Norwegian requirement for such a licence.