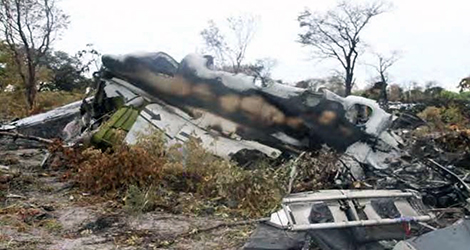 LAM Mozambique Airlines flight TM470 departed on the 29th November 2013 at 09:26 from Maputo International Airport on a scheduled flight to Luanda, Angola, and was operated with an Embraer ERJ 190-100 aircraft with registration number C9-EMC .

On board the aircraft were a total of 33 people comprised of the following: Six (6) crew members (two pilots, one engineer and three flight attendants) plus 27 passengers. 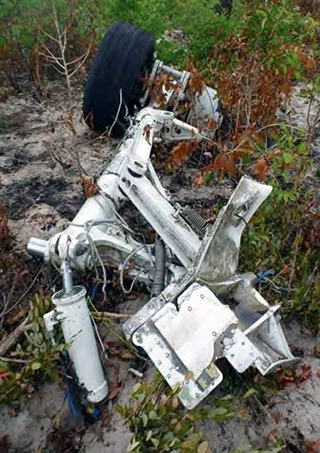 The flight operations were normal and the aircraft was in radio communication with Gaborone Area Control Centre on frequency 126.1 MHz and was cruising at FL380 (38000 ft).

At position EXEDU, a mandatory reporting point in the Gaborone FIR (Flight Information Region) which is at 72 nautical miles (nm) south of the point AGRAM which is the boundary position between Gaborone FIR and Luanda FIR (18’ 56S 02’ 228E), the Namibian Radar Data (after it was played back) revealed that the aircraft commenced a sudden descent from the normal cruising level of FL380 at 11:09:07.

Radar footage from the Namibian Air Traffic Services (ATS) during the investigation indicated that the target was lost at 11:15:49 at an altitude of 6600 ft AMSL while on its abrupt descent.

LAM Mozambique Airlines flight TM470 impacted the ground at 11:16:04 at an altitude of 3 390ft Above Mean Sea Level (AMSL) as indicated by the Flight Data Recorder (FDR).

There were no distress calls made by the pilot of LAM Mozambique Airlines flight TM470 to declare an emergency nor was there any signal transmitted from the Emergency Locator Transmitter (ELT) due to the fact that its antenna cable was cut during the time the aircraft impacted the terrain.

Namibian authorities (police) at the Eastern Kavango and Zambezi regions were informed about the missing aircraft at around 12:00.

Search and rescue operation was instituted by Namibia Air Traffic Services but could not locate the accident site the same day due to bad weather and darkness in the area.

Eyewitnesses from villagers on the Botswana side near the border heard explosions and observed smoke coming from the Namibian territory then informed the Namibian Authorities.

The accident site of LAM Mozambique Airlines flight TM470 was located the following day (30 November 2013) at around 07h00 , in Bwabwata National Park (Namibia).

The Namibian Investigators responded immediately after the crash site was located.

The Government of Mozambique and the Mozambique Airline were informed by the Namibian Government on Saturday 30 November 2013 that the wreckage has been located and identified as that of C9-EMC, an Embraer ERJ 190-100IGW and that there were no survivors.

Both CVR/FDR recorders were retrieved from the accident site on Saturday 30th November 2013.

Based on the outcome of the CVR/FDR readout, the Directorate of Aircraft Accident Investigation (DAAI) in Namibia issued a Preliminary report on 18 December 2013 which stated as follow;

According to the statement in LAM’s Manual of Flight Operation Chapter 10.1.4, Page 5 of 36, Edition 3 Revision 8, (Absence from Flight Deck) which is in Portuguese but was translated in English as follows;

“A pilot can only leave the Flight Deck when the aircraft is above 10 000 feet, for physiological reason or when carrying out his operational task. He or she shall, for that matter, first call a cabin attendant who will remain in the Flight Deck until his return. At the moment of the pilot’s exit, the other (pilot) shall lock the door, to only re-open it for the return of the absent pilot”. “The pilot remaining in the Flight Deck should be in a state of alert and situational awareness, have free and clear access to the commands of the flight”.

The Air Contractors flight DHL6321 crew took off from Leipzig Airport (Germany) at 3 h 38 bound for Bratislava Airport (Slovakia). The approximately forty-five minutes flight took place without incident and the crew was cleared for the ILS approach to runway 22....
Read More