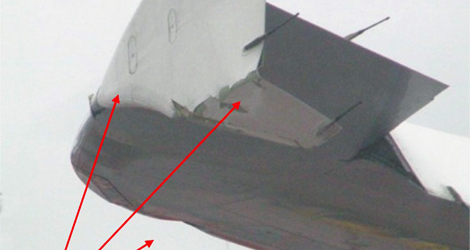 At 1630 hrs1 on 1 March 2008, the German Federal Bureau of Aircraft Accident Investigation (BFU) was advised by Hamburg Airport that the left wing of an Airbus A320 had made contact with the ground during an attempted landing. In conformity with the Federal German Law Relating to the Investigation into Accidents and Incidents Associated with the Operation of Civil Aircraft (Flugunfall-Untersuchungs-Gesetz – FlUUG), this event was investigated as a ‘Serious Incident’.

Because of the weather associated with hurricane Emma, on 1 March 2008 the Airbus A320 left Munich Airport on a scheduled flight to Hamburg at 1231hrs about two hours behind schedule, with a crew of five and 132 passengers.

Given the ATIS weather report including wind of 280°/23 kt with gusts of up to 37 kt, during the cruise phase of the flight the crew decided on an approach to Runway 23, the runway then also in use by other traffic.
During the approach to land, the aerodrome controller gave several updates on the wind.

Lufthansa flight LH44 collided with the runway with 23° bank and 47 kts crosswind.

Immediately prior to touchdown, the wind was reported as 300°/33 kt, gusting up to 47 kt. At the time of the decrab-procedure there was no significant gust. The initial descent was flown by autopilot and the co-pilot assumed manual control from 940 ft above ground.

After the aircraft left main landing gear had touched down, the aircraft lifted off again and immediately adopted a left wing down attitude, whereupon the left wingtip touched the ground.

watch the video of the incident !

The crew initiated a go-around procedure. The aircraft continued to climb under radar guidance to the downwind leg of runway 33, where it landed at 1352 hrs. No aircraft occupants were injured.

The aircraft left wingtip suffered damage from contact with the runway.

This serious landing incident took place in the presence of a significant crosswind and immediate causes are as follows:

The following systematic causes led to this serious incident: