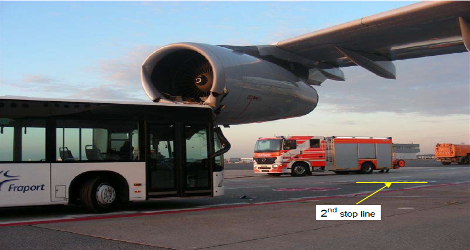 The LUFTHANSA A340-313 was on a scheduled LUFTHANSA flight from Teheran (Iman Khomeini International) to Frankfurt (Rhein-Main). 224 passengers and 12 crew members were on board. According to the flight plan, landing was scheduled at 0600 hrs after a flight time of 5:15 hours. There were no flight passengers in the passenger bus.

After landing on runway 25L, the LUFTHANSA A340-313 taxied over taxiways C and G until reaching the taxi holding position of runway 25R, at 0616 hrs. After a waiting time of almost two minutes, the ground controller gave clearance for crossing the runway and for leaving the radio frequency. At 0620 hrs, the Airbus crew contacted Frankfurt Apron on the radio frequency with the words: „Frankfurt, good morning, Airbus A3402 heavy, 25R is clear in Golf (incomprehensible) in sight.“ Apron control gave the following clearance: “Airbus A340, no delay (incomprehensible) number one via Golf to Bravo 26.” This was read back by the co-pilot with the words “Number one, Golf, Bravo 26, Airbus A340“.

According to the statements of the crew and the recordings of the Cockpit Voice Recorder (CVR), the pilot in command (PIC) was on the controls LUFTHANSA A340-313 and steered the airplane to the yellow guide-line of the parking position B26. During this, the co-pilot noticed a passenger bus on the taxi area road at the right sight of the airplane. He commented the situation with the words: “The bus stops”; the PIC answered: “By now he will know we are coming in”. A few seconds later, the co-pilot saw a follow-me car quickly approaching the airplane from the front. Immediately after the exclamation of the co-pilot: “Pay attention, the follow-me”, an abrupt braking manoeuvre was initiated. Immediately after the complete stop of the aircraft, the pilot apologized to the passengers for the braking manoeuvre. He explained that a vehicle had suddenly been driven in front of the airplane. The co-pilot complained about the behaviour of the follow-me car via radio communications to apron control. Afterwards – approximately one minute after the complete stop of the airplane – the co-pilot noticed the collision with the passenger bus when looking through the right cockpit window. He informed the PIC that engine No. 4 had collided with the bus and had to be switched off.

The evacuation procedure was announced in the cockpit of LUFTHANSA A340-313.
Via the public address system, the captain gave the order: “Attention crew on station“.

Approximately at the same time, at 0622:58 hrs, apron control instructed: “Airbus A340 shut down the engines please.“

As a precautionary measure the fire brigade was requested. The passengers and the crew could leave the airplane without injuries via stairways

Immediate Cause of the LUFTHANSA A340-313 incident was :