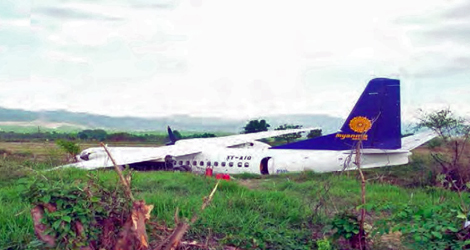 For this flight captain assigned FO to line training (Command) pilot and aircraft landed to Monghsat at about 09:25 local time.

After passengers disembarked and boarded, aircraft departed to Heho at 09:55 local time and landed at about 10:40 local time.

Aircraft was refueled at Heho and departed to Monghsat at 11:10 local time with 4 crews and 51 passengers.

First officer was designated as the Pilot flying for this flight.

During approach to Monghsat airfield, weather was fine and visibility was 4-5 Miles (8- km).

During landing roll, aircraft overrun to runway 30. At about (11:48:33) local time, aircraft struck to tree stump with IAS 40 knots and passing across to water drainage (gutter) located 110 meters from runway 30. After striking, aircraft turned to left 80 degree and came to rest. Cabin crews performed emergency evacuation, one passenger suffered serious injury, other one suffered minor injury and 53 of the occupants were survived.

There are no indications of flight control, hydraulic system and engines problems, potential for pilot incapacitation and a fire on board aircraft before the accident.

After (18) seconds flap position changed to retract and both engines torque start to increase.

Both crews did not initiated power lever reversing position.