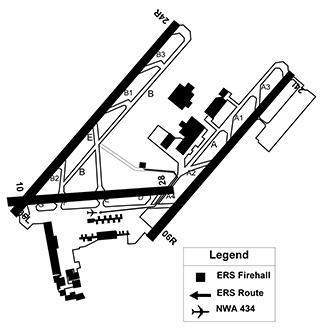 The airplane , a Boeing B727-200 (registered N278US) was was parked at gate 33 at the Montreal International (Dorval) Airport, Quebec.

Boarding of the 60 passengers started at 0625 and was completed at 0645. Push-back, to position the aircraft parallel to the ramp and the terminal building, was initiated at 0647 and completed at 0650.

After brake application by the crew prior to engine start, a flight attendant, who had just started the presentation of the aircraft safety measures, noticed smoke in the aft portion of the cabin.

The lead flight attendant entered the cockpit and advised the flight crew of a fire.

The second officer was sent to the back of the aircraft to evaluate the situation. When he reached the rear of the aircraft, where the two flight attendants were gathering fire-fighting equipment, he noticed smoke coming out of the overhead stowage bin above seats number 28 D, E and F.

The second officer then lowered the aft stair and returned to the cockpit, through the standing passengers, to inform the captain and gather more fire-fighting equipment.

While he was returning to the cockpit, flames appeared at the top of the door of the overhead bin.

One of the flight attendants of Northwest Airlines flight NWA434 donned a protective breathing equipment (PBE) smoke hood while the other flight attendant discharged a Halon fire extinguisher at the bin; the flames disappeared, but the smoke intensified and moved forward.

The second officer informed the captain of the situation; the first officer declared an emergency and requested the emergency equipment as the second officer returned to the back of the aircraft with a PBE and two fire extinguishers, one Halon 2 and one CO2 .

The Dorval tower supervisor activated the crash bell and the airport Rescue units proceeded towards the aircraft.

Upon the commands of the captain, the lead flight attendant initiated the evacuation and the first officer informed ground control of their actions at approximately 0652:43.

The first officer evacuated the aircraft via the right cockpit window as the captain went into the cabin to help the lead flight attendant with the evacuation of the passengers.

The evacuation was carried out using the front left main door escape slide.

When the second officer arrived at the back of the aircraft, he opened the door of the bin. There were no flames, but there was still a glow and he discharged the Halon extinguisher on it after having donned the PBE. In the meantime, the two other flight attendants made sure that the passengers were all moving forward towards the exit.

The second officer of Northwest Airlines flight NWA434 then went down the aft stairs and requested that the firemen enter the aircraft so he could show them the location of the fire. He then proceeded to the front of the aircraft where only the captain remained. They both evacuated the aircraft, via the slide, at approximately 0654.

The evacuation was started approximately 2 1/2 minutes after the smoke was initially noticed by the flight attendants. Within the next 90 seconds, all persons on board had evacuated the aircraft using only one exit/escape slide.

Only the first officer used another exit, his right side window. The three aft exits were unusable due to their proximity to the fire and smoke. The four overwing exits were unsuitable for egress because of the rapid displacement of the smoke to this area and the movement of the passengers to the front of the aircraft.

This left the two front doors as usable exits. The left front door was used successfully. The right exit could have been used only after removing the hand baggage which was piled up against it.

Since no able bodies were positioned, or requested, at the bottom of the escape slide until the arrival of the ERS personnel, the first passengers to evacuate landed hard on the concrete ramp.

Several of those passengers suffered back and lower body soreness in the days following the incident. Many passengers were disoriented upon exiting the aircraft.

It was dark, rainy, and windy, and they were not familiar with the configuration of the airport. Until guidance was available, some passengers, in an attempt to move away rapidly from the aircraft, ventured towards the grass area, close to runway 10/28 and taxiway Echo where there was aircraft movement.

Fortunately, the evacuation of the aircraft involved only 60 passengers, and all used the same exit. Therefore, controlling and directing those 60 passengers while close to a terminal building was easily manageable and was rapidly under control.

Origin of the Fire An extensive study of the overhead stowage bin and its contents clearly demonstrated that the source of ignition was outside the flight attendant’s bag and was not an aircraft system.

The 100 per cent polyester blankets were the source of fuel for the fire.

The TSB Engineering Branch study showed that the blankets could sustain a fire and that a match similar to the ones found in the aft lavatories could be a source of ignition.

Evidence indicates that the fire was not accidental.

Circumstantial evidence such as the matches, which had been lit, found in the handtowel dispensers of the aft lavatories close to seat row 28, combined with the fact that a similar match could have been the source of ignition, and pertinent passenger statements, have prompted a separate investigation by the Arson Squad of the Montreal Urban Community Police Department to determine the source of ignition.

The cause of the fire could not be determined.

All evidence indicates that the fire was not accidental.

On 12 December 2002, Garuda Airlines flight GA833, a Boeing 737- 300 aircraft bearing registration mark PK-GGG, was on a scheduled passenger flight from Singapore to Jakarta. It was a “turn-around” flight – it had arrived from Jakarta earlier. The aircraft was parked...
Read More