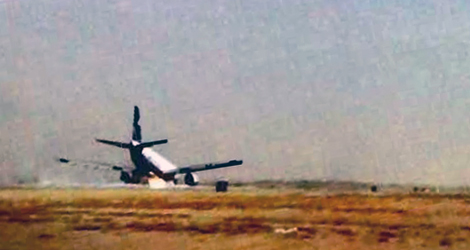 Onur Air flight SVA2865 was on a positioning flight with 10 crew members and no passengers. No discrepancies were noted on this aircraft prior to departure from Madinah. The visibility at Jeddah was good with a few clouds present. During the initial ILS approach to runway 16 Right (16R), while at 8 nautical miles (nm) and 2600 feet (ft), the landing gear handle was lowered.

Onur Air flight SVA2865 was then given an area to the northeast of Jeddah to carry out attempts at lowering the nose gear. The flight crew attempted to manually free fall the nose landing gear at least ten (10) times.

The nose landing gear would not lower into the locked position, but the nose gear doors remained open during all those attempts. As a precautionary measure, Onur Air flight SVA2865 performed a fly-by of runway 16R at 500 ft. The air traffic controller confirmed that the nose landing gear (NLG) was not down. SVA 2865 was vectored over the Red Sea to lower the fuel load, thus reducing the landing weight. During this period, the Fire & Rescue Services (FRS) at Jeddah foamed a portion of runway 16 Left (16L) between taxiway Kilo 5 (K5) and K2 (Figure 1). The majority of the FRS vehicles were standing by at the junction of taxiways K4 and K3. SVA 2865 was vectored for an instrument approach for Runway 16L.

The flight crew used the “Landing with Nose Landing Gear Abnormal” checklist ensuring the aircraft was properly prepared and configured for the approach, the before landing, the flare and the touchdown sequences, including when the aircraft stopped and the necessary procedures to secure the aircraft before evacuation.

As soon as the aircraft passed by the position of the FRS vehicles, the FRS vehicles gave chase to the aircraft and reached it within 30 seconds after it came to a full stop. Although there was no post-crash fire, the FRS personnel applied water and foam to the nose area of the aircraft. All of the crew members were evacuated from the aircraft by ladder provided by the FRS. The crew was taken to the airport clinic as a precautionary measure. All were released the same day.

The accident occurred at 14h49 at KAIA – Jeddah , Kingdom of Saudi Arabia.