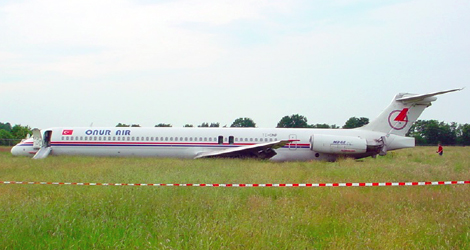 Onur Air flight OHY2263 was a  MD-88 (Boeing McDonnel Douglas) that took off at the Groningen Airport Eelde.
On June 17th, 2003 the crew rejected the take-off at a late stage, as a result of which the aircraft overran the runway ending.
The aircraft and part of the airport infrastructure sustained serious damage. 142 passengers and 7 crew members were on board of the aircraft.
None of the occupants sustained any serious injuries as a result of the accident.

The investigation shows that the crew initially rejected the take-off when an acoustic alert signal was activated. This signal pertained to a warning for an incorrect setting of the trim of the longitudinal control system.
When carrying out a check the crew did not find any peculiarities, although these were present.
After this short interruption the take-off was resumed and this time, when the (repeating) sound alert signal went off, the signal was ignored.
It is the Board’s view that take-off should not have taken place with this signal.

During the investigation a number of other operational flaws were also found, mainly pertaining to the load and the corresponding location of the centre of gravity of the aircraft and the manner these were dealt with operationally. When the captain noticed that the control force required to rotate the aircraft was significantly higher than normal he decided to reject the take-off.

At that moment the remaining runway length was too short to bring the aircraft to a complete stop before the runway end. After the aircraft overrun the runway end and collided with the approach lights and underground concrete structures of the approach lights system it came to a standstill in the soft soil, with serious damage as a result.
The evacuation took place shortly after the aircraft came to a stop.
The most important findings regarding the evacuation are: the cabin crew did not give enough evacuation instructions and not all the available cabin exits were used.
This hindered the evacuation.
Furthermore, most of the passengers stated that the crew spoke English in an insufficiently clear manner.

The presence of underground electricity wells in soft soil near the take-off and landing runway increases the risk of fire in the event of a collision.
In this accident no fire occurred and this is why it did not lead to serious consequences for the passengers and crew. The evacuation after the accident was difficult.
According to the Board, with respect to safety, ignoring the (repeating) acoustic alert signal is very wrong and very serious indeed. Onur Air recognised this after having been granted access to this report and immediately took internal measures after the incident.
However, the Board wondered whether this was an incidental mistake or a structural safety shortcoming within the Onur Air organisation. Given the issue described above -structural and/or incidental- the Dutch Safety Board investigated whether there were more accidents with Onur Air and whether similar accidents had occurred on any where else. In its report, the Board restricted itself to the ICAO database. The Board also used a recently published report from the French BEA (Bureau d’Enquêtes et d’Analyses pour la sécurité de l’aviation civile / Bureau for Investigations and Analyses for civil aviation safety). This report concerns a fatal accident with a Boeing 727 in Benin (Africa) on December 25th, 2003. Investigation of the ICAO database revealed that no other (published) accidents of Onur Air are known.
However, 37 similar accidents are known to have occured since 1995 world-wide. Out of these, there were 30 cases in which, after a take-off was rejected, an aircraft overran the end of the runway. In most cases it was a take-off that was rejected after the so-called V1 take-off decision speed2 had been passed (as was the case for the Onur Air accident). In many cases the aircraft performances had decreased by a higher actual aircraft weight and an incorrect position of the centre of gravity. In one instance a warning system was also ignored. In some of these cases, engines that were mounted below the wing(s) broke off, often resulting in fire.

The crew resumed the take off and continued whilst the take off configuration warning, as a result of the still incorrect stabilizer setting, reappeared.