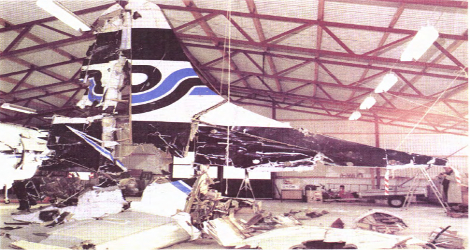 Partnair flight PAR394 was on a charter flight en route from Oslo to Hamburg. Shortly after the aircraft had entered Danish controlled air space the air traffic controller at Copenhagen Air Traffic Control Centre (ACe) observed that the aircraft turned unexpectedly to the west and then disappeared from the radar screen.

When the crew did not respond to radio-calls, steps were taken to locate the aircraft. since an aircraft accident was suspected, a search and rescue team from Hirtshals was sent to the scene.
The accident was confirmed when the team found several bodies.
Extensive search and rescue action was then initiated.

31 victims, as well as parts of the wreckage, were found floating in the sea and were brought to Hirtshals.
Later, the rest of the Partnair flight PAR394 wreckage was found scattered over several square kilometers of the seabed. An additional 19 victims were found in the area. Five persons are still missing.

Undampened oscillations in the elevator contributed to the complete breakdown of the aircraft tail.

The Partnair flight PAR394 Auxiliary Power Unit (APU) was in operation at the time of the accident.
The front support of the unit had not been made in accordance with the specifications issued by the manufacturer and the support had failed prior to impact.

The fact that the APU was operating with a defective support had an influence on the oscillations in the empennage.

The cause of the accident of Partnair flight PAR394 was loss of control and stability as a consequence of defects in the structure of the primary control surfaces.

The accident was caused by loss of control due to the destruction of primary control surfaces in the tail section, which, in turn, was caused by aeroelastic oscillations initiated by abnormal clearances in the vertical stabiliser attachments to the fuselage structure.

The condition of the attachments was a result of excessive wear in pins and sleeves used in this structural joint.
The pins and sleeves were of an inferior quality and did not satisfy specified values for hardness and tensile strength. They had also been installed and inspected using substandard maintenance procedures.
Undamped oscillations in the elevator contributed to the structural failure of the empennage. The vibratory patterns in the empennage and the oscillations in the surfaces were affected by the fact that the APU was operating with a faulty front support which was of a non-standard design and of unknown origin.