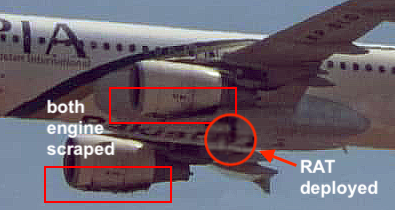 PIA Pakistan Airlines flight PK8303 crashed short of a runway in Karachi Airport, over a residential area, on May 22, 2020.

It was a domestic flight from Lahore and it was operated with an Airbus A320-214 registration AP-BLD.

99 people were on board, 2 passengers survived while 97 on board including 8 crew members died in the crash; additional fatalities on ground are unconfirmed.

According to the initial evidences, the crew was high on profile and struggling to descent and land: they reported descending from 3500 to 3000 ft AAL while 5 NM on final.

The following are the crew / ATC recordings where the PM (pilot monitoring) is heard saying “we are comfortable (?), we can make it“.

When being cleared to land, a “Master warning” can be heard during a crew transmission.

Following facts were highlighted in the interim report issued by the AAIB Pakistan : 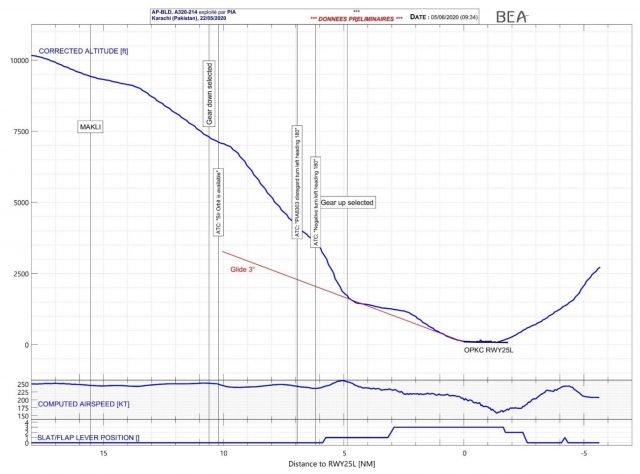 Note : For the descent path, the altitude has been shifted to start from 84 ft in order to match the altitude of the runway at ground impact.

At 500 ft, the FDR indicates: landing gear retracted, slat/flap configuration 3, airspeed 220 knots IAS, descent rate 2000 ft/min. According to the FDR and CVR recordings several warnings and alerts such as over-speed, landing gear not down and ground proximity alerts were disregarded.

Channel Express Fokker F27 G-CEXF was operating its fourth sector of the morning, the first two sectors having been operated by a different crew. Prior to the first sector, the commander noted that the aircraft was experiencing a notable low frequency vibration, felt...
Read More