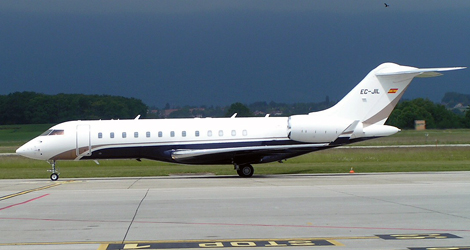 On 21 September 2012, a Bombardier BD-700 aircraft, registration EC-JIL and call sign MGO758, was making a flight from Nice (LFMN) to Ibiza (LEIB). At the same time, a Dassault Falcon 2000, registration CS-DNP and call sign NJE599U, was flying to Ibiza from Porto (LPPR). Aircraft EC-JIL was in radio and radar contact with the Palma ACC2, Ibiza Approach (APP) Sector, and was receiving vectors to intercept the runway 06 localizer (LLZ) at LEIB.

It was on a course of 240° to the southeast descending to FL 080. Aircraft CS-DNP was on a southeasterly course direct to the IAF TILNO on the ILS approach to runway 06 at LEIB. It was under the control of TACC Levante. Later, once in contact with Ibiza APP, it was cleared to continue its descent to FL 090.

At 19:14:58, aircraft CS-DNP reached the IAF TILNO. After passing it the aircraft turned left toward the localizer.

Seconds later, at 19:15:35, aircraft CS-DNP requested to intercept the ILS glide slope for runway 06. Ibiza APP instructed it to turn right to 160° and cross the localizer.

After several requests made by aircraft CS-DNP to confirm the instruction to cross the localizer, at 19:16:06, Ibiza APP, after instructing a turn to 160° on two occasions, instructed the crew to turn immediately heading 180°.

Aircraft CS-DNP started the turn when it was over the localizer, placing it on a course toward EC-JIL, which had previously been cleared to turn right heading 270°.

Aircraft CS-DNP was established at 3,000 ft and had passed the runway 06 localizer, on a heading opposite that being flown by EC-JIL, which was descending to 2,500 ft as authorized. The two aircraft flew within 1.2 NM horizontally and 300 ft vertically of each other.

Both aircraft completed their flights without further incident.

There were no injuries and there was no damage to either aircraft.

The fact that ATC did not use English with aircraft EC-JIL while it was providing vector guidance to both to intercept the localizer on the same runway prevented the crew of aircraft CS-DNP from having a clear picture of the approach sequence, since they were unaware that the preceding aircraft in the approach sequence was aircraft EC-JIL, information that was conveyed in Spanish. This lack of a clear situational awareness by the crew of aircraft CS-DNP could have contributed to its crew’s misunderstanding of the instruction to cross the LLZ.

One of the contributing factors has thus been identified as the use of Spanish in a situation involving an aircraft whose crew did not master this language. This problem has been addressed before by the CIAIAC, which issued safety recommendation REC 25/03 in its report IN-060/2002 regarding the use of English on frequency:

REC 25/03 (IN-060/2002). It is recommended that the DGAC create a working group with the participation of AENA and representatives from operators, professional pilot associations and professional controller associations to study the possibility of regulating the sole use of English in ATC communications in situations involving a pilot who does not speak Spanish, and the conditions under which said regulation is to be implemented.