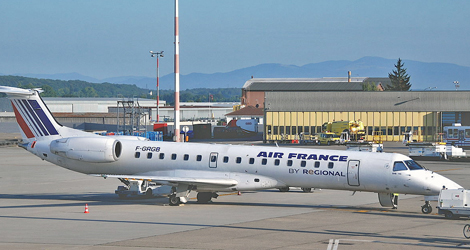 Regional CAE flight YS310 was an Embraer ERJ 145 that took off from Paris Charles de Gaulle bound for Ljubljana with two members of flight crew, one member of cabin crew and 49 passengers. 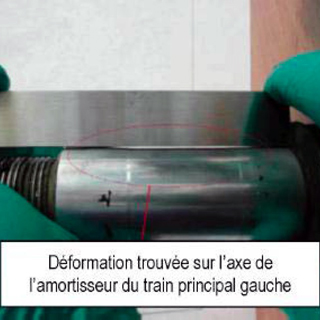 The flight progressed without incident until the descent. The crew was under radar vectoring for an ILS approach to runway 31 in operation. Descending to an altitude of 7,000 ft, on heading 110, the co-pilot (PF) agreed to the suggestion of the pilot-in-command (PNF) to change to a visual approach.

The approach controller agreed to the request from the crew and authorised them to change to a visual approach with a clearance limit of 4,000 ft. The runway was to the left of the aircraft and the meteorological conditions made a visual approach possible, with turbulence deemed moderate by the crew.

The PF turned base leg. At this point the aircraft was at an altitude of 6,500 ft and was approximately 4.5 NM from the threshold of runway 31. The clearance limit was lifted as the aircraft descended through 5,500 ft.

The PF, who could not see the runway from his right-hand seat position, turned towards final on the basis of information from the pilot-in-command. The aircraft was established for final at a distance of 2.8 NM from the runway threshold and at an altitude of 2,900 ft, i.e. a height of 1,709 ft.

Following the triggering of a “SINKRATE” EGPWS Alert, the co-pilot of Regional CAE flight YS310 announced that he was struggling to control the aircraft.

The controls were therefore transferred to the pilot-in-command who continued the approach.

At between 1 and 1.5 NM from the runway threshold, the pilot-in-command levelled off the aircraft at a height of approximately 800 ft to reduce the aircraft speed and set the flaps to an angle of 45 degrees.

At 0.9 NM from the threshold and still at a height of 800 ft, the pilot-in-command restarted the aircraft descent.

A “SINKRATE” EGPWS Alert was triggered for 6 seconds, followed by a “PULL-UP” Warning for 11 seconds. At this point the aircraft was at a height of 100 ft and the pilot-in-command began the touch-down:

These two actions aimed at reducing the rate of descent were not sufficient to prevent the hard landing.

The pilot-in-command controlled the aircraft’s track on the runway and proceeded to the apron.

The crew was authorised to perform a visual approach. The co-pilot decided to turn base leg too close to the runway taking into account the altitude, which positioned the aircraft on a final approach above the final approach profile and with a high indicated speed. Continuation of the unstabilised approach, in turbulent conditions, led to the hard landing.

Overconfidence on the part of the pilot-in-command in combination with the passive attitude of the co-pilot following the transfer of control during the final approach resulted in a (significant) authority gradient in the flight deck.

In these circumstances, breaking off the approach was not envisaged by the crew despite awareness of several EGPWS activations and failure to meet stable approach conditions.

The following factors also contributed to the accident:

The helicopter, Helisureste EC-GQX which was used for medical evacuation with operations based in Las Rozas (Madrid), had flown to the operator's maintenance base , in San Vicente del Raspeig (Alicante), on 23rd July 1999, and once there had been subject to a...
Read More