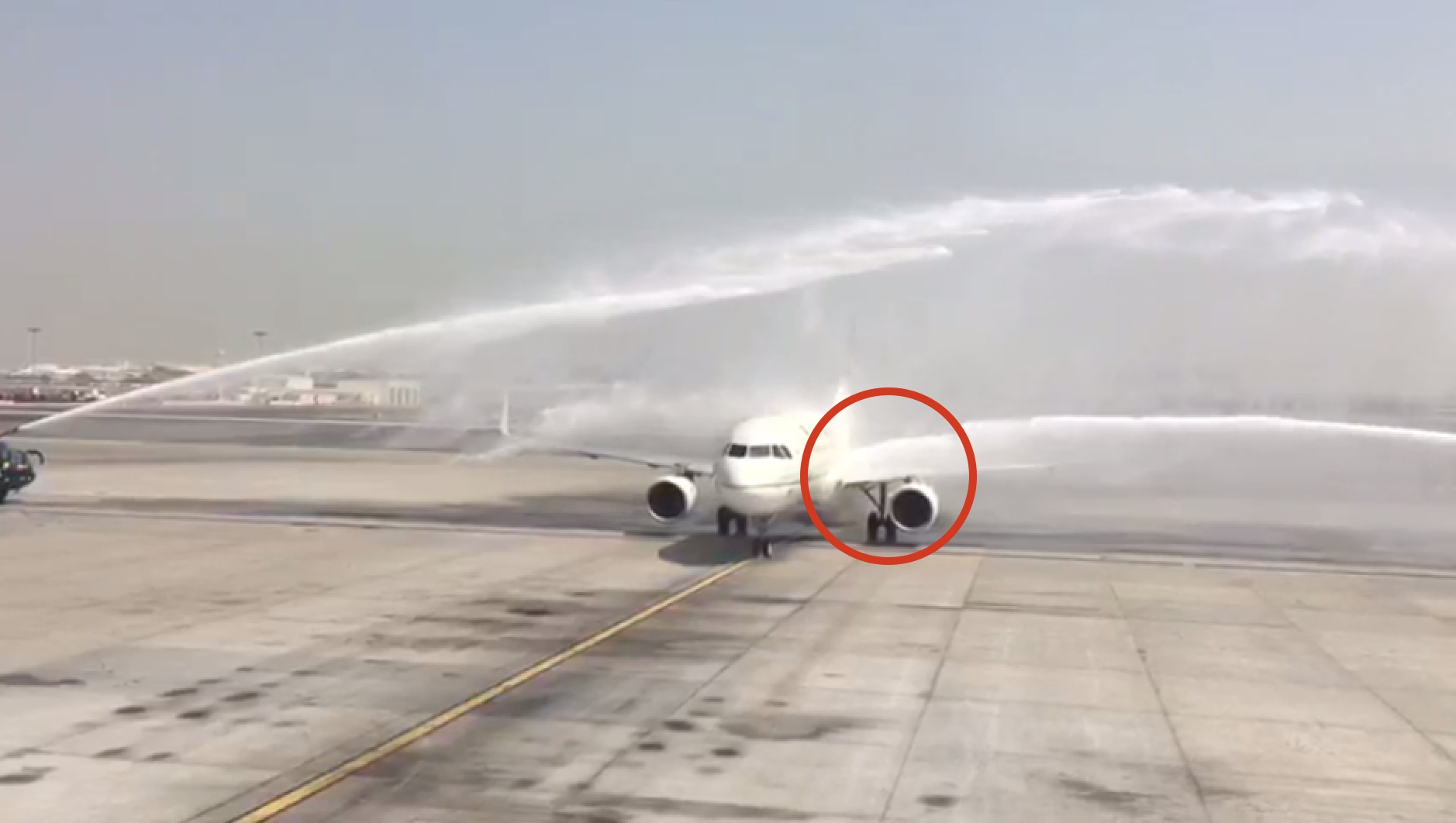 There were two flight crewmembers, 5 cabin crewmembers and 119 passengers on-board.

Saudia flight SV566 and the landing were uneventful and the Aircraft taxied to gate C58 as instructed. After turning towards the terminal, two fire- fighting vehicles, which were located on either side of the taxiway, started spraying jets of water to welcome the Aircraft with a water salute in celebration of the Saudi Arabia National Day . 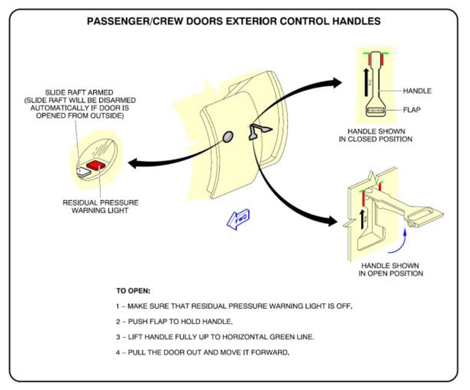 The vehicle turret operators selected a water jet with a high kinetic energy to form a far-reaching arc.

The fire-fighting vehicle positioned on the left side of the Aircraft, FIRE 8, experienced a problem with the roof turret, which ceased to follow the operator’s input from the hand controller.

The high pressure water jet was suddenly sprayed upwards and then downwards, as Saudia flight SV566 passed underneath .

The left forward over-wing emergency exit hatch of Saudia flight SV566 opened when the latch was pushed in by the high kinetic energy of the water jet.

The flight crew was alerted to the opening of the emergency hatch by the master warning system and stopped the Aircraft immediately.

They were not aware that a water salute had been arranged on arrival at the gate and therefore they could not inform the cabin crew or passengers prior to the event.

The Aircraft was towed to the gate with the slide ramp attached, where the passengers disembarked normally. The deployment of the over-wing emergency exit hatch into the cabin slightly injured the passenger seated in the adjacent window seat.

The passenger received medical attention and decided to continue their journey after being medically cleared. Once the Investigation team was satisfied that the relevant evidence was collected and secured, the Operator’s maintenance organisation inspected the Aircraft and detached the slide ramp.

The Aircraft departed Dubai International Airport at 1622 local time as a commercial flight following a four-hour delay, after the Operator’s Technical Services department issued an Engineering Authorization, which permitted the operation of the Aircraft for one flight without the left over-wing slide ramp fitted.

The Air Accident Investigation Sector determines that the cause of the Incident was the erratic directional movement of the water jet onto the push panel of the left forward over-wing emergency exit hatch, which, when pushed inwards, resulted in the emergency exit hatch opening and falling into the cabin, slightly injuring the passenger seated in the window seat.

The Air Accident Investigation Sector identifies the following contributing factors to the Incident:

(a) The fire vehicle’s hand controller potentiometer failed to control the movements of the roof turret.

(b) The process of a water salute had not been formally described and risk assessed by the airport fire service, thus the possibility of erratic water turret movement was not identified.

Air Tahiti F-OIQU airplane was on initial climb at a speed of about 170 kt, the captain noticed that the slip indicator ball had travelled to the extreme right. He used the rudder trim as far as the stop to reduce the load on the rudder. He managed to move the ball...
Read More