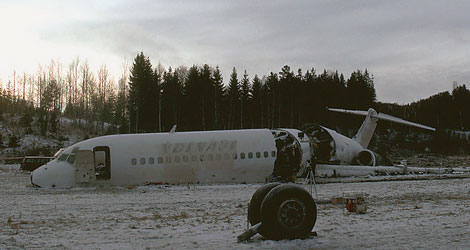 Scandinavian SAS flight SAS751 took off on 27 December 1991 at 0847 hrs from Stockholm/Arlanda airport. It had landed at Stockholm/Arlanda at approx 2210 hrs the previous day and had been parked outdoors overnight. Prior to takeoff the aircraft was de-iced.

The captain made a rolling takeoff which was normal up to the rotation. In connection with liftoff the captain heard an abnormal noise which he could not identify. The noise was recorded by the aircraft’s Cockpit Voice Recorder (CVR) as a low humming noise.

After approx. 25 seconds flight the right engine started to surge. The captain throttled back on that engine somewhat, but without the surging ceasing. The surges continued until the engine stopped delivering thrust 51 seconds after the surges had started.
When the flight had lasted approx. 65 seconds the left engine also started to surge, which the pilots did not notice before this engine also lost thrust. This happened two seconds after the right engine had failed.
When the engines had failed the crew prepared for an emergency landing.

During the approach to the selected field , Scandinavian SAS flight SAS751 collided with trees

When the aircraft was entirely out of the cloud at a height of 300 to 250 metres the captain elected to try and land in a field in roughly the direction of flight, north-east of StockholmlArlanda.

During the approach to the selected field the aircraft collided with trees. In the collision, the major part of the right wing was torn off. The tail of the aircraft struck the ground first. After impact the aircraft slid along the ground for approx. 110 metres before stopping.

The fuselage was broken into three pieces on impact and during the subsequent braking on the ground. No fire broke out. One passenger incurred a disabling back injury. Apart from four persons, all on board made their own way out of the aircraft.

The Board of Accident Investigation finds that the accident was caused by SAS’ instructions and routines being inadequate to ensure that clear ice was removed from the wings of the aircraft prior to takeoff. Through this, the aircraft took off with clear ice on the wings.

In connection with liftoff clear ice came loose and was ingested by the engines. The ice caused damage to the fan stages of the engines which led to engine surging. The surges destroyed the engines.