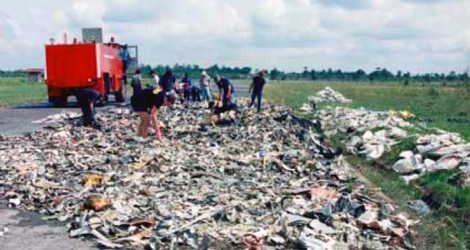 At 08:47:23 the aircraft passed FL245. Ten seconds later, the crew requested permission to proceed directly to PARDI.
The air traffic controller instructed flight MI185 to standby, to continue flying directly to Palembang and to report when reaching FL350.

At 08:53:17, Silkair flight MI185 reported reaching FL350. Subsequently, the controller cleared MI 185 to proceed directly to PARDI and to report when abeam Palembang.

Analysis of the CVR stoppage indicated that the failure of the CVR could not have been caused by a short circuit or overload.

According to the Jakarta ATC transcript, at 09:10:18 the controller informed Silkair flight MI185 that it was abeam Palembang. The controller instructed the aircraft to maintain FL350 and to contact Singapore Control when at PARDI.
The crew acknowledged this call at 09:10:26.

There were no further voice transmissions from Silkair flight MI185.

The last readable data from the flight data recorder (FDR) was at 09:11:27.4.  Jakarta ATC radar recording showed that Silkair flight MI185 was still at FL350 at 09:12:09.
The next radar return, eight seconds later, indicated that Silkair flight MI185 was 400 feet below FL350 and a rapid descent followed. The last recorded radar data at 09:12:41 showed the aircraft at FL195. The empennage of the aircraft subsequently broke up in flight and the aircraft crashed into the Musi river delta, about 50 kilometres (30 nautical miles) north-north-east of Palembang at about 09:13. The accident occurred in daylight and in good weather conditions.

Following are a few evidences taken from the report : the final conclusion is that “the technical investigation has yielded no evidence to explain the cause of the accident.“