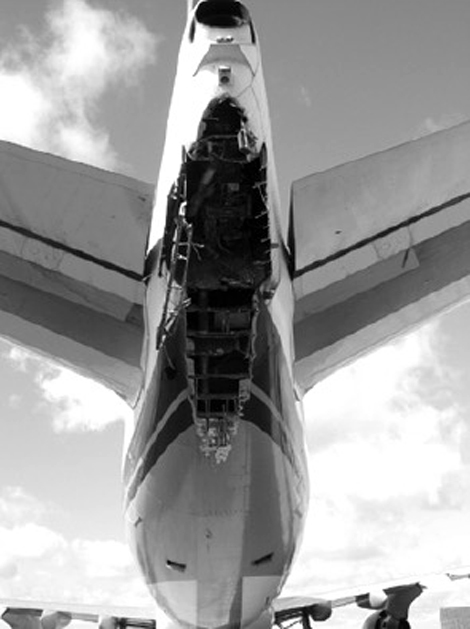 […] the captain taxied 9V-SMT to the end of runway 23 Left to use the full runway length for take-off.
The pilots had set the flap at Flap 20 and the STAB TRIM at 6.6 for the take-off.
The captain was the pilot flying and using automatic throttle applied power for take-off, having set the EPR at 1.34 for each engine.
The pilots did not notice anything untoward and everything appeared normal to them as the aeroplane accelerated down the runway.

The first officer said he called V1 as the aeroplane reached 123 kt, and rotate as it reached 130 kt.
At 132 kt the captain started pulling back the control yoke to pitch the aeroplane nose up for lift-off, and at 137 kt the pitch attitude (aeroplane body angle) began increasing.

For a normal take-off the aeroplane would have become airborne at 8.5º to 10º body angle.
Because the airspeed was too low when the aeroplane rotated, it initially remained on the ground, with its tail pitching down and striking the runway.
The tail remained in contact with the runway and scraped for about 7 seconds over a distance of about 490 m giving off white smoke. The aeroplane moved across to the right edge of the runway before becoming airborne.

The pilots said they felt a buffet during rotation (the flight data recorder (FDR) recorded an initial stick shaker indication at about this time) and the captain asked the other 2 pilots if they thought it was a tail strike, but they did not think the tail had struck the runway.
Three seconds later as the aeroplane became airborne the pilots got an Auxiliary Power Unit (APU) fire warning, followed one second later by a stick shaker warning, with the airspeed between 154 kt and 158 kt.
The captain checked the airspeed on his PFD and thought it was normal in relation to the V speeds displayed on the speed tape. The FDR showed that following the stick shaker, which activated for about 6 seconds, the aeroplane nose pitched down briefly to 8.5º body angle before increasing to 11º.
Thrust was not increased.

The first officer os Singapore Airlines flight SQ286 made a distress call advising, ”Mayday Mayday Mayday Singapore 286 we have [a] fire on [the] APU“.

The aerodrome controller acknowledged the distress call and cleared SQ286 to climb to and maintain 1000 feet and to turn left and fly a left hand circuit for runway 23.  The controller advised the pilots that SQ286 had landing priority.

Had the aeroplane moved off the runway, stalled or had an engine failure with its degraded take-off performance, a more serious accident would probably have occurred.