Singapore Airlines flight SIA236 was a scheduled service from Brisbane, Australia to Singapore operated with a Boeing B777-200. The flight was normal until the landing at 2035 hours at the Singapore Changi Airport.

The first officer (FO) was the pilot flying (PF) the aircraft.
The weather information broadcast by ATIS  ‘O’ at 1930 hours was rain over the airfield with braking action on Runway 02L reported as medium, wind calm and visibility of 6 km. This was updated by another ATIS ‘P’ at 2006 hours and the changes were highlighted by the Pilot-in-Command (PIC) to the PF during the descent.

The crew intended to land with an autobrake setting of 3 and the use of full reverse thrust on a wet runway was also discussed. During the descent both pilots were concerned about the weather and commented on the weather radar showing ‘all red’ (clouds with high water content). The crew obtained a deviation to avoid the weather.

On initial contact with Changi control tower, the crew of Singapore Airlines flight SIA236 were advised of rain over the airfield and strong low level windshear.

The crew were also advised of medium to poor braking action reported by a preceding arrival aircraft.
At about 1,800 ft, Changi control tower advised the flight to continue its approach and that there was strong crosswind, but no windshear reported by the preceding arrival aircraft. At this point, the PF indicated that he would conduct an automatic landing (autoland).

The PIC concurred, saying that they ‘might as well do an autoland’ as they ‘would not be able to see the runway until a few hundred feet’.

Shortly after, a landing clearance was given by the tower with the surface wind reported at 140 degrees and 15 knots.
When the PF sighted the runway about 45 seconds later (about 600 ft above ground level) he requested to land the aircraft manually instead of using the autoland. The PIC agreed with the PF’s request. The PF disengaged the autopilot at about 520 ft. 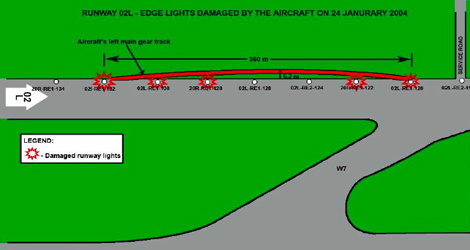 In order to counter the crosswind, and maintain the desired ground track, the autopilot was maintaining a crab angle of 5 degrees into the wind. The aircraft’s heading was 28 degrees and the ground track was 23 degrees.
After the autopilot was disengaged, the PF used the cross control technique, of applying left rudder while lowering the right wing, to counter the crosswind. The aircraft maintained the glideslope at a descent rate of about 750 ft per minute with an indicated airspeed of about 135 knots. The Vref was about 128 knots.

Singapore Airlines flight SIA236 landed firm at 1.6 g at 0.1 dot to the left of the localizer which is about 4 m to the left of runway centreline at an indicated airspeed of 131 knots (ground speed of 148 knots) with the left wing low at 1.1 degrees.

According to the crew the aircraft skidded to the left on touchdown.

The PIC took over the control of the aircraft with full right rudder application and brought the aircraft back on the paved surface of the runway.

Some antiskid system fault messages appeared on the EICAS (Engine Indication and Crew Alerting System) display during the excursion. These messages were most likely the result of damage sustained on the left hand landing gear after it departed from the paved runway surface.
The PIC taxied the aircraft to the assigned passenger gate after assessing it was safe to do so. The persons on board disembarked normally from the aircraft through the aerobridge.