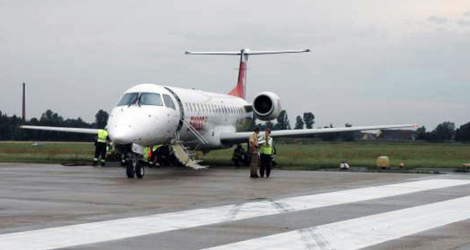 The Serious accident took place on 18-07-2005 : the Swiss Airlines Flight LX1190 departed from Zurich-Kloten to Nuremberg and was delayed eight minutes by vigorous thunderstorms.

During the subsequent climb the aircraft was subject to turbulence and ice accretion.

The approach of Swiss Airlines Flight LX1190 to Nuremburg was flown through rain showers and turbulence. The crew subsequently reported that they had been prepared for a landing on a wet runway.

The approach was flown with 22° of flaps set; in view of the wind conditions they increased the approach speed (VAPP) commensurately to 148 kt. 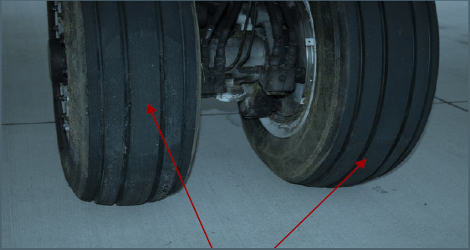 The crew reported that braking action failed to bring the aircraft to a stop before the end of the runway.

The pilot-in-command was at the controls and steered the aircraft at high speed left into runway exit F, which is at 90° to runway 28.

The aircraft ground looped about 200° to the left, leaving the runway tail first and coming to rest with the main landing gear units on the grass.

Air Traffic Controllers in the tower subsequently reported that, prior to touchdown, Swiss Airlines Flight LX1190 had floated for a greater distance along the runway than was usual.

There were no injuries to persons; damage to the aircraft was limited to the landing gear tyres.

The passengers disembarked using the on-board stairs and were transported to the terminal by bus.

The cause of the runway overshoot was aquaplaning on a rain-soaked runway surface.