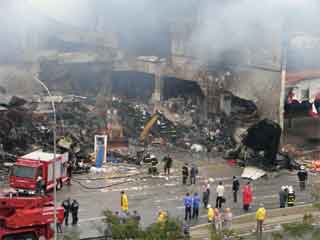 There were a total of 187 souls on board the aircraft, being six active crewmembers and 181 passengers, including 2 infants and 5 extra crew members (not on duty).

The weather prevailing along the route and at the destination was adverse, and the crew had to make a few deviations.
Up to the moment of the landing, the flight occurred within the expected routine.
The aircraft was operating with the number 2 engine reverser de-activated, in accordance with the Minimum Equipment List (MEL).
According to information provided to the TWR by crews that had landed earlier, the active runway at Congonhas (35L) was wet and slippery. During the landing, at 18:54 local time (21:54 UTC), the crew noticed that the ground spoilers had not deflected, and the aircraft, which was not slowing down as expected, veered to the left, overran the left edge of the runway near the departure end, crossed over the Washington Luís Avenue, and collided with a building in which the cargo express service of the very operator (TAM Express) functioned, and with a fuel service station.

All the persons onboard perished.
The accident also caused 12 fatalities on the ground among the people that were in the TAM Express building.
The aircraft was completely destroyed as a result of the impact and of the raging fire, which lasted for several hours.
The accident caused severe damage to the convenience shop area of the service station and to some vehicles that were parked there.
The TAM Express building sustained structural damages that determined its demolition.
The operator’s maintenance control system allowed postponing corrective actions without an appropriate evaluation of the risk relative to the association of failures.

After the landing of TAM flight JJ3054 , there was neither deflection of the ground spoilers, nor activation of the auto-brake

The FDR did not record any movement of the thrust lever of the engine nº 2, from the moment it was positioned at “CL” up to the collision of the aircraft;

The landing occurred with one of the thrust levers at the “IDLE” position and the other one was registered by the FDR as being at the “CL” position;

Approximately six seconds after the touch-down of the main gear, the first activation of the brakes through the pedals occurred, and reached maximum deflection five seconds later;

For the conditions of operation with an inoperative reverser, wet runway, positioning of a thrust lever in “REV” and the other in “CL”, a distance of more than 2,000 meters would be necessary for a complete stop of the aircraft, without considering the thrust provided by the nº 2 engine;

The thrust reverser of the A-320 can only be activated when: the aircraft is on the ground with both the right and the left landing gear dampers compressed; a channel of the FADEC (Full Authority Digital Engine Control) is operating according to the reverse signal of the corresponding thrust lever; and a signal of the TLA (Thrust Lever Angle) is being validated by, at least, one SEC (Spoiler Elevator Computer);

The “RETARD” auto call-out, during the flight JJ3054, did not comply with the function to which it was designed, since it stopped sounding when one of the thrust levers was at the “REV” position and the other one was at “CL”;

Up to the date of the accident, the main runway of Congonhas did not have a RESA;

The main runway of Congonhas presented, during a long time, a low coefficient of friction and irregularities on its surface which favored the accumulation of water;

On 29 June 2007, the operations on the main runway of Congonhas were resumed, after the completion of the pavement repair work, but before the grooving was made;