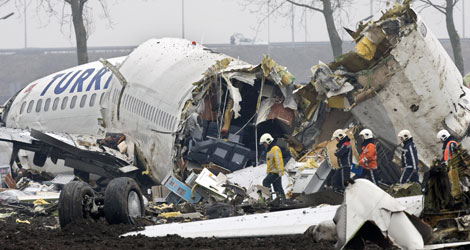 Turkish Airlines flight TK1951 was a Boeing 737-800 (flight TK1951) operated by Turkish Airlines , flying from Istanbul Atatürk Airport in Turkey to Amsterdam Schiphol Airport, on 25 February 2009. As this was a ‘Line Flight Under Supervision’, there were three crew members in the cockpit, namely the captain, who was also acting as instructor, the first officer who had to gain experience on the route of the flight and who was accordingly flying under supervision, and a safety pilot who was observing the flight. There were also four cabin crew members and 128 passengers on board. During the approach to runway 18 Right (18R) at Schiphol airport, the aircraft crashed into a field at a distance of about 1.5 kilometres from the threshold of the runway. This accident cost the lives of four crew members, including the three pilots, and five passengers, with a further three crew members and 117 passengers sustaining injuries.

The aircraft entered a stall situation with the autopilot engaged. The autopilot was disengaged at an altitude of between 400 and 450 feet above ground level.

During the accident flight, while executing the approach by means of the ILS instrument landing system with the right autopilot engaged, the left radio altimeter system showed an incorrect height of -8 feet on the left primary flight display. This incorrect value of -8 feet resulted in activation of the ‘retard flare’ mode of the autothrottle, whereby the thrust of both engines was reduced to a minimal value (approach idle) in preparation for the last phase of the landing.

Due to the approach heading and altitude provided to the crew by air traffic control, the localizer signal was intercepted at 5.5 NM from the runway threshold with the result that the glide slope had to be intercepted from above. This obscured the fact that the autothrottle had entered the retard flare mode. In addition, it increased the crew’s workload. When the aircraft passed 1000 feet height, the approach was not stabilised so the crew should have initiated a go around. The right autopilot (using data from the right radio altimeter) followed the glide slope signal. As the airspeed continued to drop, the aircraft’s pitch attitude kept increasing. The crew failed to recognise the airspeed decay and the pitch increase until the moment the stick shaker was activated. Subsequently the approach to stall recovery procedure was not executed properly, causing the aircraft to stall and crash.