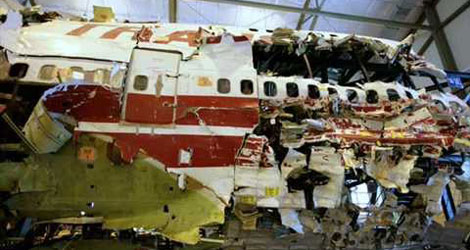 The flight departed JFK about 2019, with 2 pilots, 2 flight engineers, 14 flight attendants, and 212 passengers on board. All 230 people on board of TWA Trans World Airlines flight TWA800 were killed, and the airplane was destroyed. Visual meteorological conditions prevailed for the flight, which operated on an instrument flight rules flight plan.

The National Transportation Safety Board determines that the probable cause of the TWA flight 800 accident was an explosion of the center wing fuel tank (CWT), resulting from ignition of the flammable fuel/air mixture in the tank.

the captain of an Eastwind Airlines Boeing 737 (Stinger Bee flight 507) reported that “we just saw an explosion up ahead of us here…about 16,000 feet or something like that, it just went down into the water..”

The source of ignition energy for the explosion could not be determined with certainty, but, of the sources evaluated by the investigation, the most likely was a short circuit outside of the CWT that allowed excessive voltage to enter it through electrical wiring associated with the fuel quantity indication system.

Contributing factors to the accident were the design and certification concept that fuel tank explosions could be prevented solely by precluding all ignition sources and the design and certification of the Boeing 747 with heat sources located beneath the CWT with no means to reduce the heat transferred into the CWT or to render the fuel vapor in the tank nonflammable.