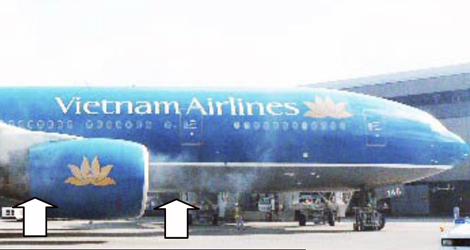 The occurrence of Vietnam Airlines flight HVN950 covered by this report falls under the category of “Flames in the designated fire zone of an engine” as prescribed in Clause 10, Article 166-4 of the Civil Aeronautics Regulations of Japan, and is classified as a serious incident.

At about 07:44, while taxiing, the right engine fire warning alarm went off.

The crew shut down the engine and then triggered the fire-extinguishing system, following which the fire warning alarm stopped.

Subsequently, after the aircraft arrived at the ramp and all passengers and crewmembers had disembarked, the right engine caught fire; the fire was extinguished by the firefighting squad that had been waiting there ready for operation.

There were 277 people on board, consisting of the Pilot in Command, the First Officer, 11 other crewmembers and 264 passengers. There were no injuries. The aircraft sustained minor damage.

It is considered highly probable that fuel leaked from the fuel supply hose of the right engine while the Aircraft was taxiing after landing, and that the leaking fuel caught fire, resulting in this serious incident.