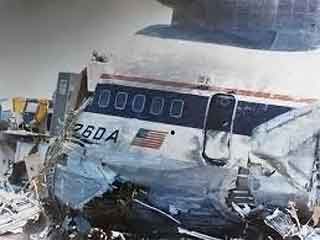 Delta Airlines flight DL191, a Lockheed L-1011-385-1, N726DA, crashed while approaching to land on runway 17L at the Dallas/Fort Worth International Airport, Texas.
While passing through the rain shaft beneath a thunderstorm, flight 191 entered a microburst which the pilot was unable to traverse successfully.
The airplane struck the ground about 6,300 feet north of the approach end of runway 17L, hit a car on a highway north of the runway killing the driver, struck two water tanks on the airport, and broke apart.
Except for a section of the airplane containing the aft fuselage and empennage, the remainder of the airplane disintegrated during the impact sequence, and a severe fire erupted during the impact sequence.

The flight crew of Delta Airlines flight DL191 had applied maximum thrust shortly before the airplane departed rapidly from the glideslope, and the captain called for TOGA within 3 seconds of glideslope departure

This resulted in the aircraft’s encounter at low altitude with a microburst-induced, severe windshear from a rapidly developing thunderstorm located on the final approach course.