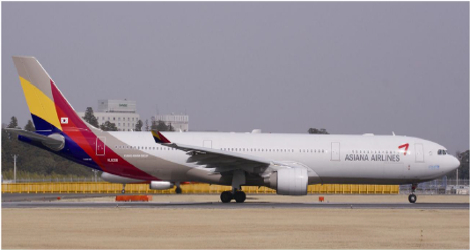 While flying at approximately 40,000 ft over Matsue City, Shimane Prefecture, around 15:17 Japan Standard Time (JST: unless otherwise stated all times are indicated in JST, UTC+9h), the aircraft was shaken.

Two passengers were seriously injured and one passenger was slightly injured.

There were 221 people on board, consisting of the pilot in command (PIC), 14 other crew members and 206 passengers.

The airplane was not damaged.

It is probable that the initial severe shaking of the Asiana Airlines flight OZ231 was a result of the Aircraft passing through or nearby cumulonimbus, due to the PIC and the R Captain failing to notice that the weather radar was off, and encountering atmospheric disturbances with severe changes in wind direction and speed coupled with strong updrafts.

It is possible that the next shaking of the Aircraft may have been influenced by the PIC’s control operations after disengaging the A/P to stabilize the aircraft.

It is probable that the reason for the PIC and the R Captain failing to notice that the weather radar was off was that their monitoring of the weather conditions and instruments was insufficient.